As Obama Restricts Arctic Drilling, A Look at the Region's Different Faces: From 'Workable' to 'Extreme' 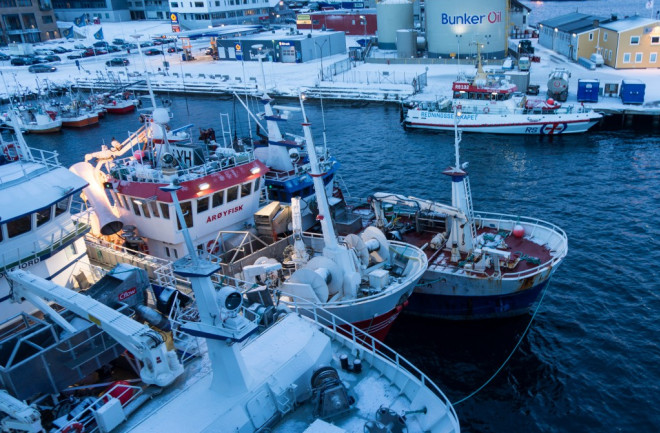 Fishing boats docked in Tromsø harbor on Jan. 18th, 2015. Thanks to ice-free conditions, this is the so-called "workable Arctic." (Photo: © Tom Yulsman)

Note: This is a guest post by Gloria Dickie, one of two master's students who joined me in Tromsø, Norway to attend the Arctic Frontiers conference last week. She wrote this post before today's announcement by the White House that it is designating 9.8 million acres in the Arctic waters of the Beaufort and Chuckchi Seas off Alaska's coast as off-limits to consideration for future oil and gas leasing.

Dickie is a student in the environmental journalism program I direct at the University of Colorado's new College of Media, Communication and Information. Her work has appeared in High Country News, The London Free Press, and OnEarth.org. She recently worked as an intern at National Geographic online.

For centuries, the vast expanse of the Arctic has combined with the harshness of its climate and the darkness of its winter days to pose daunting challenges to explorers, scientists, and businessmen alike. But there really is no such thing as the Arctic. It is actually an immensely varied region that includes permanently frozen stretches of the Arctic Ocean at one extreme, and the cosmopolitan city of Tromsø, Norway, which as early as the 1800s was described as the "Paris of the North," at the other. This city is home to 70,000, including people from 100 different countries. Speaking at this year’s Arctic Frontiers conference, Tim Dodson, executive vice-president of StatOil, said the Arctic can be melted down to three simple categories: extreme, stretch, and workable. StatOil, a Norwegian oil and gas company that brings in nearly $95 billion a year and is the 26th most profitable company in the world, has a particular interest in those first two categories.

Source: Wikimedia Commons As Dodson explained it, the "workable" Arctic consists of areas free of sea ice where exploitation of large reserves of oil and natural gas can be accomplished using technologies that already exist, and where any remaining technology needs are achievable in the short- to medium-term. Thanks to the moderating influence of the Gulf Stream, and its northern branch, the Norwegian Current, this includes a large swath of territory stretching from the Norwegian Sea up into the Barents Sea. As a result of human-caused warming in this region, this "workable" Arctic is expanding. Then there’s the "stretch" Arctic, areas that are ice-free in the warm months. The Beaufort Sea north of Alaska and Canada is one noteworthy example. In these regions, drilling for oil and natural gas and exploiting other resources will require major innovations, but ones that are probably achievable with focused investment in the medium- to long-term, Dodson said.

Editor's note: Today's action by the White House puts a sizable portion of the "stretch" Arctic north of Alaska off limits to oil and gas drilling. President Obama also plans to designate 12 million acres of Alaska's Arctic National Wildlife Refuge as wilderness, putting it off limits to drilling as well. This has sparked protest from Rep. Senator Lisa Murkowski of Alaska.

"Extreme” is the most challenging Arctic, most especially from an oil company’s perspective. The extreme Arctic requires long-term investment and innovation, and such projects are relegated to the distant future, according to Dodson. (Although the recent opening of 54 blocks in the Barents Sea for possible oil exploration arguably diminishes the gap somewhat between the "workable" and "extreme" Arctics.) Dodson’s definition and view of the Arctic ignores features that are unrelated to exploitation of its resources. By contrast, scientists have a broader view of the region. But they are faced with large gaps in knowledge that often make it difficult to draw solid conclusions about aspects of the Arctic's climate and ecosystems. Robert Campbell, an oceanographer at the University of Rhode Island, refers to this as the “big black box.” The challenge of conducting research in the Arctic, particularly in the winter months, means Campbell has little research to build onwhen studying how zooplankton — small organisms that drift in oceans, seas, and fresh bodies of water — survive the long winter period on shallow Arctic shelves with little food. Such information could help scientists forecast how well zooplankton might fare in warming waters. This is an important question as zooplankton are a vital source of energy for larger species, including marine mammals such as whales, and thus are a key component of ecosystem health.

Zooplankton. (Source: Woods Hole Oceanographic Institution) Sarah Fortune, a PhD student at the University of British Columbia, faced similar challenges in her study of bowhead whales in northern Canadian waters. In Nunavut’s Cumberland Sound, Fortune sought to determine whether the waters were a summertime foraging habitat for the whales. Rough Arctic conditions meant little was known about the whales’ diet in Canadian waters and the impact climate change would have on its food sources. The best method, Fortune found, was to deploy long-term tags on ~20 individuals and collaborate with local Inuit communities to examine the stomach contents of legally hunted whales.

A bowhead whale, caught in an Inuit subsistence hunt in Igloolik, Nunavut, in 2002. (Source: Wikimedia Commons) To carry out her research, Fortune had to cope with sea ice, lack of infrastructure, reduced satellite coverage, and polar storms. Persevering in the face of these difficulties, she has helped to narrow the existing research gap. But she still has many questions, such as how much time the whales spend foraging and where in the water column they consume prey. Lastly, the Arctic poses a unique challenge for its inhabitants. Here in Tromsø, the midnight sun of summer eventually gives way to a long period of darkness when the sun refuses to peak up above the low-lying mountains. Warmed by the Norwegian Current, Tromsø doesn’t experience the prolonged extreme temperatures of areas just a little inland. Temperatures often are in the 20s (Fahrenheit), and even up into the low 30s. On January 21st, the city’s inhabitants celebrated the return of the sun with traditional solboller, or “sun buns," small yellow-colored sweet breads with a custard center. Tromsø, it seems, offers hope. Its presence and global relevance show that "workable" parts of the Arctic can be tamedto humankind's tastes, and that a cultured, modern city can be built here. But is this a good idea for the other Arctics? Should those extreme, black box reaches remain untouched and unspoiled?