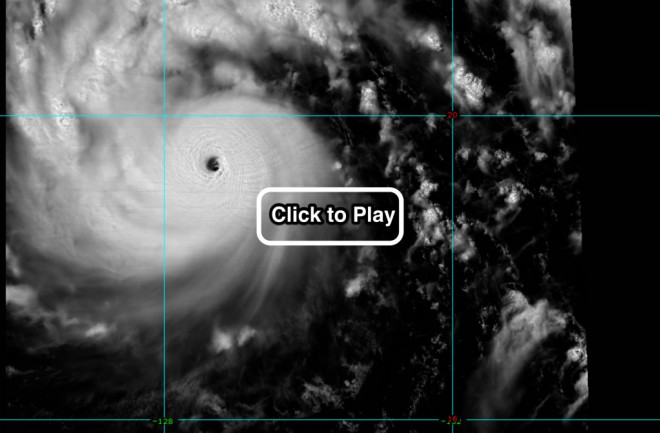 Source: Cooperative Institute for Meteorological Satellite Studies) In just 24 hours spanning Monday and Tuesday, Nepartak exploded from a tropical storm with winds of about 70 miles per hour to a Category 4 storm with 150 mph winds. Over 88-degree waters (31 degrees C), which is up to 3.6 degrees above normal, Nepartak has now strengthened to a Category 5 storm. Its maximum sustained winds were pegged this morning at 173 mph, with gusts up to an incredible 207. (The thumbnail at right is an infrared image of the super typhoon with its forecast track.) Click on the screenshot at the top of this post to watch a highly detailed animation of images acquired today by the Himawari-8 satellite. As the animation shows, the storm features a compact, round eye surrounded by spiral arms where intense convection is taking place. Quoting meteorologists, Andrew Freedman at Mashable describes Nepartak as a "near-perfect storm" in its appearance.

An animation of images acquired by the Himawari-8 satellite between July 5th and 6th, 2016, shows Super Typhoon Nepartak aiming for Taiwan. In this full-disk view, look for the storm in the upper left quadrant. (Note that as with the first animation, this one cycles several times. Source: CIRA/RAMMB) Above is a full-disk view of the Earth centered over the Pacific, also captured by the Himawari-8 satellite. Click on it to watch an animation of images spanning July 5th and 6th. The animation consists in part of true-color images acquired during the day. To avoid the scene going blank at night, infrared imagery is also used, with city lights added based on data from the Suomi NPP satellite. Liquid water clouds are highlighted by shades of red, and ice clouds in shades of gray. The warm waters Nepartak is swirling over extend to great depth, "creating some of the highest oceanic heat content readings one sees for a tropical cyclone," writes meteorologist Jeff Masters at Weather Underground. When it makes landfall in Taiwan, Nepartak likely will have weakened to a Category 4 storm. That's still mighty powerful. Moreover, the mountainous terrain of Taiwan could wring huge amounts of moisture from Nepartak, potentially leading to dangerous landslides and flooding. After crossing the island of Taiwan, the storm is forecast to move west and curve toward the north. It will make a second landfall in China and is forecast to move on a track that would take it just west of the megacity of Shanghai. Last week, monsoon storms dumped eight inches of rain on this area. That means the soils are already sopping wet, limiting their ability to absorb more moisture. Unfortunately, Nepartak could bring up to an additional 16 inches.