As Earth warms from human activities, brutal cold waves are becoming less severe, not more so 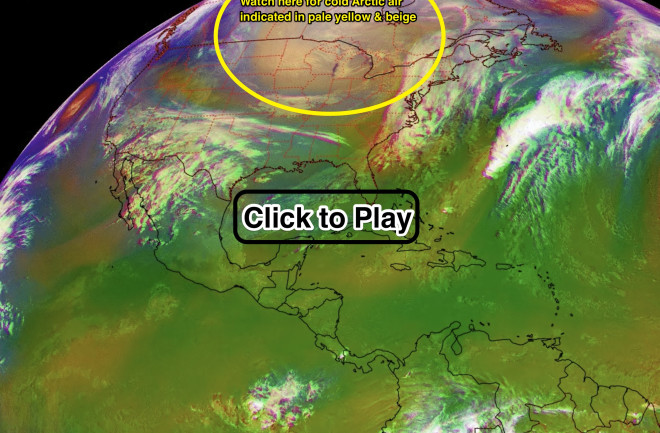 Visualized in this animation of GOES-16 weather satellite images is the outbreak of frigid Arctic air in the Upper Midwest and Great Lakes regions of the United States on January 29 and 30, 2019. In the false color scheme (characteristic of what's known as 'Air Mass RGB' imagery), the coldest air is depicted in pale shades of yellow to beige. (Source: CIMSS Satellite Blog) As brutal cold spilled out of the Arctic and enveloped much of the U.S. Upper Midwest and Great Lakes in late January, news stories tied the event to global warming. Here's a sampling of headlines: "Brace for the Polar Vortex; It May Be Visiting More Often" (NY Times) "The Polar Vortex And How It's Related To Global Warming (Forbes) "Polar Vortex Linked to Climate Change (WGBH) An increasing but still contested body of science suggests that rapid and intense warming in the Arctic actually is triggering changes in the jet stream that can affect weather far to the south. So these stories were accurate — as far as they went. But as it turns out, intense Arctic cold snaps like the one at the end of January have become less widespread and common as the globe has warmed due to human activities, not more so. And so by downplaying or even leaving that key bit of context out, some of the coverage didn't go far enough. Consider the graphic below showing the change in unusually cold temperature in the contiguous 48 U.S. states between 1948 and 2015:

Percentage of the land area of the contiguous 48 states with unusually cold daily high and low temperatures during the months of December, January, and February. The thin lines represent individual years, while the thick lines show a nine-year weighted average. Lighter blue lines represent daily highs, while darker blue lines represent daily lows. The term “unusual” in this case is based on the long-term average conditions at each location. (Source: EPA) As the graph shows, since about 1980, the percentage of the contiguous 48 states that has experienced particularly cold episodes during winter has dropped significantly. Over the long term, record high temperatures have become increasingly common since the 1970s, whereas the opposite has happened with record cold temperatures:

As the source of these graphs, the U.S. Environmental Protection Agency, puts it:

If the climate were completely stable, one might expect to see highs and lows each accounting for about 50 percent of the records set. Since the 1970s, however, record-setting daily high temperatures have become more common than record lows across the United States

Kenneth Kunkel, a researcher at North Carolina State University who studies extreme weather in the long-term context of climate, notes that past North American cold waves have been much worse than what we've experienced in recent years. Quoted by my colleague (and long-time friend) Andrew Revkin in National Geographic, Kunkel cited cold waves in 1936, 1970, 1977, 1983, 1989, and finally 1996. “Nothing since then has approached the magnitude of those,” Revkin quotes Kunkel as saying. “Since that time they’ve been kind of wimpy, really.” This is not to say that extreme weather outbreaks possibly resulting from amplified warming in the Arctic are insignificant. They may well be yet another symptom of the climate system becoming increasingly ornery as we've poked at it with the big stick of heat-trapping greenhouse gases. Like a grizzly bear, you never quite know just how the climate beast will respond when you make it angry. Sometimes, it will surprise you. We also need to keep our eyes on the overall trend: Although winter hasn't been repealed, and cold snaps obviously still occur, over the long term, the globe is getting warmer overall, and brutal Arctic outbreaks will likely continue to be less common and widespread. Some might be tempted to conclude that global warming is therefore a good thing. But here's the thing about wild beasts: Once they get angry enough, they can hurt you real bad.