As 2015 Begins With Record Warmth, is the Pacific Primed to Dump Huge Amounts of Heat Into the Atmosphere?

It's official: According to NOAA's National Climatic Data Center, the first quarter of 2015 has set a new record, with the January through March period coming in as the warmest such period on record across the globe's land and ocean surfaces. The month of March was also ranked warmest by NCDC in a record dating back 136 years. The Japan Meteorological Agency concurs, whereas NASA, which does its own independent analysis, ranked March as third warmest. That's a distinction without much of a difference since the estimates of all three agencies are very close to each other. Two climatic factors may now be conspiring with humankind's emissions of heat-trapping greenhouse gases to push the globe toward an entire year of record warmth: El Niño and a broader phenomenon known as the Pacific Decadal Oscillation. First, let's consider El Niño, which is one side of a climatic pattern called the El Niño-Southern Oscillation, or ENSO. During an El Niño, heat stored in the tropical Pacific Ocean is released into the atmosphere, which tends to give a boost to global average temperatures. NOAA's latest forecast is for a 70 percent chance of El Niño continuing through summer and a 60 percent chance that it will persist through the fall.

It bears mentioning that El Niño's evolution over the past year did not go according to the forecasters' script. But in March, developments in the tropical Pacific pointed pretty strongly to El Niño continuing. As Emily Becker put it in NOAA's ENSO blog recently:

Last month, we saw the first signs of an atmospheric response to the warmer-than-average sea surface temperatures that had been in place in the tropical Pacific for several months, leading us to declare the presence of El Niño conditions. In March, those conditions strengthened a bit.

Wind departures from average in the tropical Pacific during March 2015. Purple shading indicates the location of the westerly wind burst. (Source: NOAA Climate.gov figure by Fiona Martin, based on Climate Prediction Center data.) The map above depicts one strong sign that the atmosphere and ocean are now responding together in a way that's indicative of El Niño. The arrows show the direction of the winds during March in a large portion of the Pacific Ocean. Note the purple shading, which indicates a particularly strong burst of winds blowing in the direction of those arrows — from west to east. Ordinarily, trade winds along the equator blow in the opposite direction. This helps bottle up warm surface waters in the western part of the tropical Pacific. But here, they've reversed, helping warm water to flow toward the east. This is a hallmark of El Niño. In fact, the purple area on the map above depicts a burst of westerly winds (out of the west) that was the strongest since 1997. And at that time, a monster El Niño was brewing. Current forecasts don't call for anything as strong as that El Niño event. But once again, nature does have a way of surprising us. We'll just have to wait and see. In the meantime, the other phenomenon — the Pacific Decadal Oscillation — is worth keeping an eye on. In terms of its effect on sea surface temperatures in the Pacific, it is akin to El Niño, but its pattern is broader, and whereas El Niño is a phenomenon that takes place over an annual timescale, the PDO occurs over decades. During that monster El Niño in 1997 and 1998, an enormous amount of heat was released from the Pacific Ocean into the atmosphere, helping to make that year the warmest on record up until that point. By releasing all of that heat, the tropical Pacific cooled. A year later, the broader PDO switched into what's known as its negative phase — and it stayed there until just a few months ago. During this same long period, the rise in the Earth's global average surface temperature slowed down, something that skeptics have seized on to cast doubt on humankind's impact on the climate. That impact never was in scientific doubt, since multiple lines of evidence — from shriveling glaciers and shrinking Arctic sea ice to increases in the heat content of the oceans — pointed to continuing climate change resulting from humankind's influence. But why did the warming of the globe's surface slow down? Ordinarily, 90 percent of the heat that builds up in the climate system winds up getting absorbed in the ocean. Research by Kevin Trenberth and John Fasullo of the National Center for Atmospheric Research has shown that during the PDO's negative phase over the past decade, more than 30 percent of that heat seems to have penetrated below 700 meters in the ocean. In other words, it has been locked away so deeply that it has not been able to heat the atmosphere. But as signs point to a reversal of the PDO pattern, now that heat may be primed to start coming back out of the ocean.

A measure of the Pacific Decadal Oscillation shows it flipping into a positive phase during the past few months. (Source: Japan Meteorological Agency) The graph above shows how the PDO has switched between negative (blue) and positive (red) phases. Look all the way to the right. See that red spike? Next, check out the map below. It shows the typical pattern of sea surface temperatures during the positive phase of the PDO. 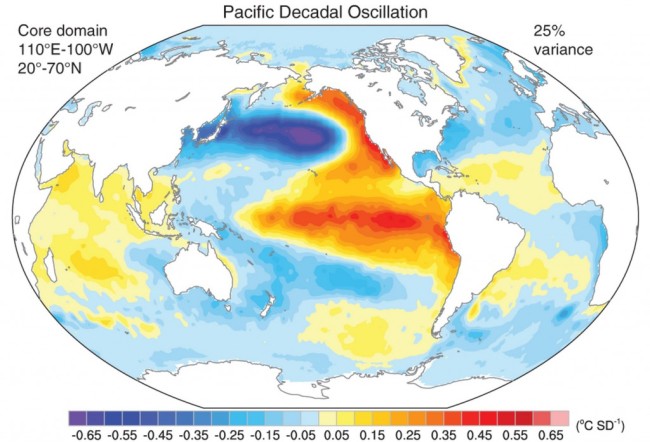 Modified from "An apparent hiatus in global warming?" by Kevin E. Trenberth and John T. Fasullo, Earth's Future, 5 December 2013 Note that big red blob of warm water in the tropical Pacific, with an extension up along the west coast of North America, as well as the cold blue blob in the northern portion of the central Pacific. Now, compare this map with how things have actually developed in the Pacific during the past four months:

Note that abnormally warm water along the equator on either side of the dateline, along with its extension up along the coast of North America, as well as the cold patch in the northern Pacific? These conditions are indicative of a positive PDO. But will they persist for a decade or longer, allowing even more stored heat to come pouring out of the ocean and into the atmosphere, helping to accelerate global warming? Or will the PDO drop quickly back into its negative phase? As with the shorter-term phenomenon of El Niño, we'll have to wait and see. Meanwhile, a study published April 13 in the journal Nature Climate Change shows that an even longer-term phenomenon related to the PDO could be primed to flip. It's known as the Interdecadal Pacific Oscillation, or IPO. As the authors put it:

Recent history suggests that the IPO could reverse course and lead to accelerated global warming in the coming decades.