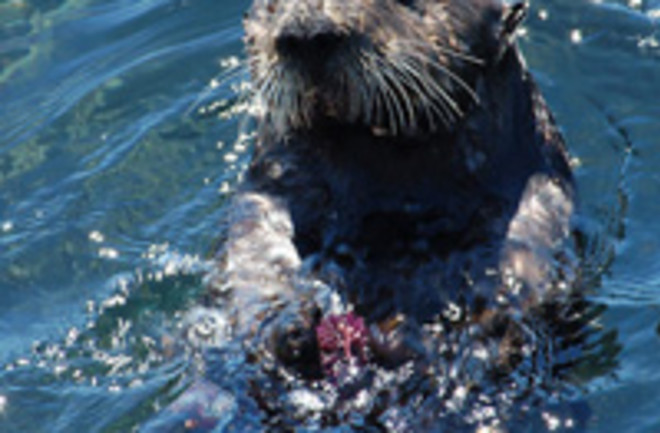 California sea otters, furry frolickers of the saltwater seas, are in trouble. And the root cause is... a freshwater toxin? That's the surprising truth, according to a study in the journal PLoS One led by Melissa Miller, a state wildlife veterinarian. For the last several years, the otters on California's coast have been dying in droves, and their population diminishing. No one could quite put a finger on why. Disease and starvation floated as explanations, and sharks seem to be devouring more sea otters lately. But none of these were the root cause, Miller finally found. Instead, she says, the culprit is a blue-green algae called Microcystis. This type of simple bacteria loves stagnant, nutrient-rich fresh water, and it's been showing up more and more lately in coastal California locales like Pinto Lake, near Monterey Bay.

"The best way to describe it? The lake turns the color of automobile antifreeze with chunks of broccoli floating in it," said Robert Ketley, water quality manager for the nearby city of Watsonville. "It's that grotesque. When the scum dries, it has a turquoise color to it." [Los Angeles Times]

Microcystis thrives in freshwater, but the cycle of water carries it out to sea.

Eventually the fresh water flows into the ocean, carrying the algae with it. However, the toxin does not break down right away as it reaches the salt water. It can last well over three weeks without any serious degradation. [Reuters]

During that time, the thinking goes, the toxin enters shellfish that nourish themselves by filtering the water. Sea otters love to eat shellfish, and chowing down on contaminated ones builds up the toxic concentration. To test this idea one step further, Miller bought pounds of oysters and mussels and tested exposing them to Pinto Lake water. The result? The shellfish showed toxic concentrations of more than 100 times that of the surrounding water. Microcystis has been around for billions of years, so why the sudden resurgence of its super-blooms? One oft-mentioned factor is nutrient-rich runoff from agriculture

. But the study teams says climate may play a role as well.

Raphael Kudela, a professor of ocean sciences at UC Santa Cruz and co-author of the study, cautioned that blue-green algae may be spreading, at least in part, because of climate change. Their study did not look at the issue directly, but Kudela in an interview cited other research that connects warming with the algae. "Climate change could be a factor," Kudela said. "These algae like warm, high-nutrient waters." [The New York Times]

DISCOVER: Curb Your Cat, Save a Sea Otter

80beats: Out-of-State Mates Bring Florida Panthers Back from the Brink