An animation of images from NASA's Terra and Aqua satellites shows the shrinkage of floating sea ice in Baffin Bay during June of 2016. (Images: NASA EOSDIS. Animation: Tom Yulsman) With the exception of March, every month so far this year has set a record low for the extent of Arctic sea ice. The National Snow and Ice Data Center reports that in June, the extent of floating ice in the region was 525,000 square miles below the 1981 to 2010 long-term average. That's an area equivalent to California, Nevada, Oregon, Washington and Idaho combined. And it means June saw the lowest amount of sea ice for the month in the satellite monitoring record, which began in 1979. 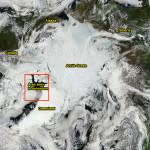 Click to enlarge The animation of satellite images above shows the shrinkage of sea ice in Baffin Bay between Greenland on the right, and Baffin Island on the left. The first image was acquired on June 10, and the second on July 4th. When watching the animation, keep in mind that open water appears almost black. (Click on the thumbnail at right for a labeled image of the Arctic region that can help you get your geographic bearings.) Right now, sea ice extent in this area is running considerably below average. In the animation, note how generally white ice gives way to bluer ice. That's an indication of melting on the surface of floating sea ice. 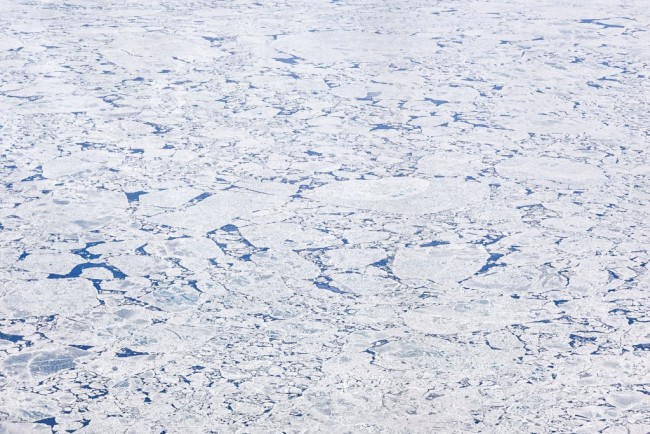 Broken sea ice in Baffin Bay with melt ponds on the surface, as seen from a commercial airliner on July 4, 2016. (Photo: ©Tom Yulsman) I just happened to be flying over Baffin Bay on July 4th while returning from an overseas trip, and I took the photo above. The ice is fragmented, and the bluish color is indicative of melting at the surface. Thanks to record warmth, more of the Arctic’s sea surface remained unfrozen this past winter than ever before in the era of satellite monitoring. Marc Serreze, director of the NSIDC said back in March that he had "never seen such a warm, crazy winter in the Arctic."

The warmth and dearth of ice in the winter raised questions about whether Arctic sea ice would set a new record this coming September for the smallest extent ever observed since the start of satellite monitoring. September is the end of the warm season in the Arctic. 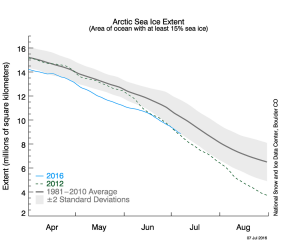 Source: NSIDC As the graph at left shows, so far in 2016, sea ice has mostly tracked lower than in 2012, which holds the record for lowest extent on record. Even so, the latest outlook report from the Sea Ice Prediction Network does not favor a record low this year. Thirty forecasts using statistical models, dynamical models, and other approaches, went into the report. Just one points toward a new record low this year. One contributing factor is a change in weather patterns: Low pressure has set up over the central Arctic Ocean, leading to cloudiness and holding down temperatures. This has caused a slowdown in the shrinkage of ice. And this pattern is forecast to continue into mid-July. I asked Ted Scambos, lead scientist for the NSIDC science team, about this. Here was his reply:

Earlier in May, we noticed that most of the Arctic Ocean area began to show surface melting about two weeks early. This was impressive, and could have meant much faster rates of loss in June, because wet snow is much darker than dry snow. The flip to strong low pressure dominating Arctic circulation in June meant that this key part of the solar energy season was muted in its impact.

Still — the Arctic remains slightly warmer than average; and the low pulls warm air northward in a few areas. Most importantly, the ice is thin. A change in July could still pull this to a record.

In September, I'll be on the Arctic archipelago of Svalbard with some of our Center for Environmental Journalism graduate students reporting on Arctic climate change issues. Whether Arctic sea ice sets a record then or not, we should have something to share — video, photography and written stories. So I hope you'll check back.