Meanwhile, in far northern Greenland — where the Sun has set and will not return for more than 100 days — ice is melting 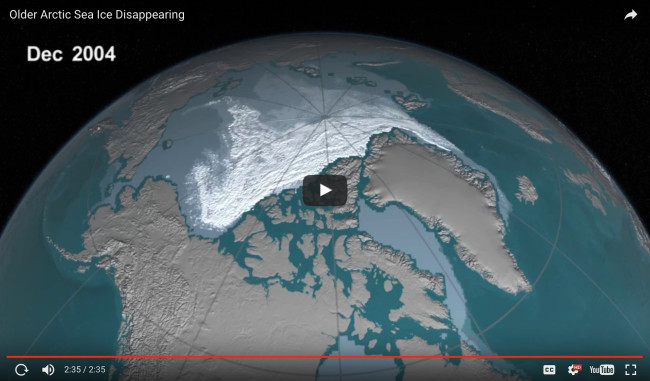 In addition to shrinking in surface extent, Arctic sea ice is becoming younger and thinner. This animation, narrated by Walt Meier of NASA's Goddard Space Flight Center, shows dramatic changes in the age, and by extension thickness, of Arctic sea ice during the era of satellite measurements. (Source: NASA’s Scientific Visualization Studio/Cindy Starr) Arctic sea ice continues to be in trouble. Even as we head toward the coldest part of the year in the high north, the ice isn't forming as quickly as it has in years past. In fact, the extent of Arctic sea ice is at record low levels for this time of year. As of Oct. 29, it was 744,018 square miles below the long-term average for the date. That's an area greater than California, Arizona, Nevada, Oregon, Washington and Idaho combined. The extent of the ice on the 29th also was well below what was seen on the same date in October of 2007, which holds the current record for lowest average extent for the entire month. 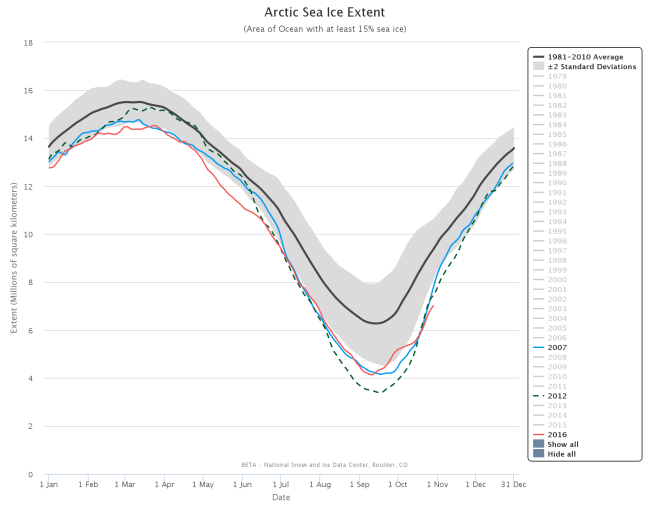 A comparison showing the extent of Arctic sea ice in 2007 (blue line), 2012 (dashed green line) and the current year (red line). The lowest average extent for the entire month of October was set in 2007, and the second lowest in 2012. As the graph shows, ice extent is trending lower right now than in those two years. (Source: NSIDC) At the beginning of the month, sea ice extent was significantly greater than in 2007. But since then, it has declined dramatically. With this in mind, we'll just have to wait for the National Snow and Ice Data Center to publish its monthly analysis to know whether October of 2016 will set a new record for lowest average extent for the entire month. Sea ice in Antarctica is also at its lowest extent for the end of October. So considering both the Arctic and Antarctic, sea ice globally is lower than it has been at this time of year than in any other year since regular satellite monitoring began in 1979. 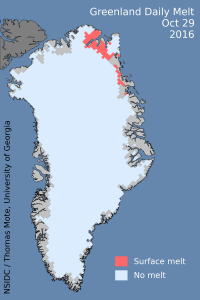 (Source: NSIDC) Meanwhile, click on the graphic at right to check out what's happening in northernmost Greenland. That orange-ish color is indicative of melting at the surface of the ice sheet. I find this striking, since at this time of year, temperatures should be frigid. In fact, for this part of the Arctic, the polar night is already descending: While there is still some twilight, the Sun has already gone down and will not return at all for more than 100 days. Blips of surface melting in Greenland in late October are not unprecedented. It happened in 2012, for example — the year which saw a record extent of melting in Greenland. But it is certainly unusual. I checked what the GFS weather model was predicting for surface temperatures on Oct. 29 along a part of the coast where the map indicates melting. It showed a forecast as warm as -3.4 degrees C, or 26 degrees F. That's shockingly warm for this time of year. Here's how temperatures are forecast to vary from the norm today for a large portion of the Northern Hemisphere: 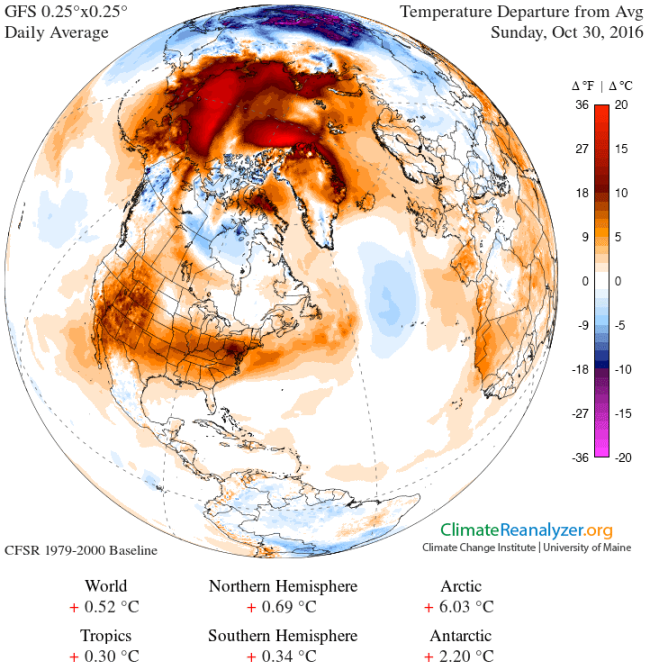 That sea of orange and red colors over the Arctic Ocean and Greenland show temperatures as much as 36 degrees F above normal. For the Arctic as a whole, the average temperature was forecast to be nearly 11 degrees F warmer than normal. And that's how conditions have looked for much of the month. The map also shows strikingly abnormal warmth over much of the United States, but also anomalous chill over Siberia. This pattern is linked to a very strange circulation pattern in the stratosphere for this time of year. But that is a tale for a different day.