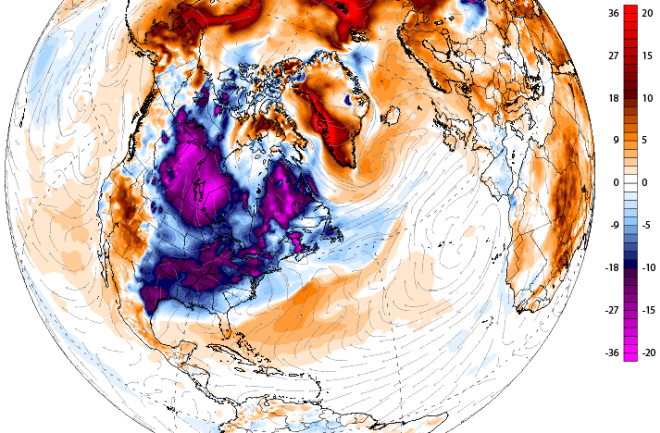 Departure from average temperatures for Feb. 27, 2014, as forecast by the GFS model. (Source: Data/image obtained using Climate Reanalyzer™ http://cci-reanalyzer.org, Climate Change Institute, University of Maine, USA.) Baby, it's cold outside — again, especially for residents of the Upper Midwest who've been beset with repeated Arctic blasts this winter. But as in previous episodes, that's only part of the story, as the graphic above illustrates. It shows the forecast departure from normal temperature over the Northern Hemisphere. Notice that while the eastern half of the United States is shivering, large parts of the higher latitudes are considerably warmer than normal.

Source: Climate Reanalyzer™ (http://cci-reanalyzer.org), Climate Change Institute, University of Maine, Orono, Maine. Once again a loopy jet stream is to blame. Click on the thumbnail at right to see what it looks like. The map shows the jet stream as forecast by the GFS model for today. A sharp trough of low pressure has dropped down across much of the eastern half of the United States, opening to door for Arctic air to spill south. The latest Arctic blast comes on a day when the Royal Society and National Academy of Sciences have released an overview of climate change, written in non-scientific language and targeted at general audiences. I'm sure pundits will use the cold temperatures some people are experiencing in the United States to deride the report. But as the map above shows, they will be telling only part of the story. The new report addresses the issue of cold snaps in a warming world. Here's part of what it has to say:

Global warming is a long-term trend, but that does not mean that every year will be warmer than the previous one. Day to day and year to year changes in weather patterns will continue to produce some unusually cold days and nights, and winters and summers, even as the climate warms.

The report provides a clear, straightforward and relatively concise overview of the evidence for climate change, and what's causing it. I recommend that you check it out, and also pass it along to anyone you know who is puzzled about the issue — including anyone shivering under the latest blanket of Arctic air and wondering what happened to global warming.