April was the warmest such month on record, continuing an extraordinary stretch of global warming 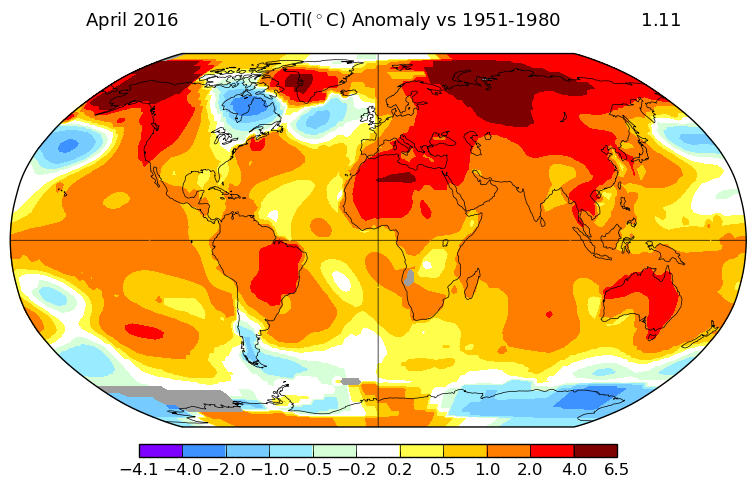 Unusual warmth dominated much of the globe in April, particularly the high latitudes of the Northern Hemisphere. It was the warmest April on record. (Source: NASA GISTEMP) Following six previous record-setting months, April 2016 kept the run going: It was the warmest such month on record, according to data just released by NASA's Goddard Institute for Space Studies. April was .43 degrees F warmer than the previous record for April, set in 2010. The extraordinary warmth of the past seven months is attributable in some measure to the record-setting El Niño now finally subsiding. SEE ALSO:As El Niño fades, here comes La Niña But the warmth contributed by El Niño has been built atop a much higher base: Due to human-caused warming, Earth's global average temperature is now considerably higher than it once was. That said, there are signs that things may be cooling off from the extreme record set last February. That month was an astonishing 2.39 degrees F (1.33 C) warmer than the 1951-1980 average, which smashed the previous record for a February.

SEE ALSO: Reliable, official numbers now in for February 2016 show that it smashed the previous record for the month

April was "just" 1.99 degrees F (1.11 C) warmer than the long-term average for the month. So maybe we've come off the downright scary peak we saw in February. And with a cooling La Niña episode likely to take hold by late summer or fall, it's possible that a temporary hiatus from month after of month of tumbling records is coming. But even if that happens, the long-term trend of human-caused warming almost certainly will continue. So in the decades to come, we should expect many more records to fall.