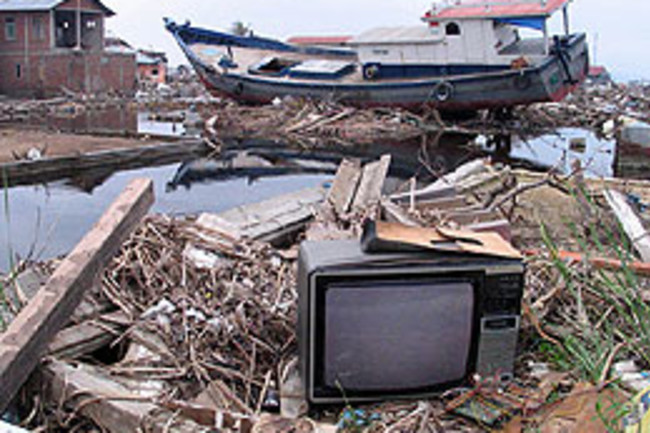 During last December’s tsunami, this fishing boat washed half a mile inland, into a devastated neighborhood in northest Banda Aceh, Sumatra. Could a Caribbean tsunami cause similar damage to the sea’s northern islands? | Courtesy of the Caltech Tectonics Observatory

Four months after the devastating tsunami that swept through the Indian Ocean, researchers are furiously evaluating the risk of similar events elsewhere around the world. Nancy Grindlay, a marine scientist from the University of North Carolina at Wilmington, now has both bad news and good news for the 35.5 million residents of the northern Caribbean islands. These islands, she reports, face their own serious tsunami risk. While the history books report several fatal Caribbean tsunamis in the past, Grindlay has found evidence that even larger tsunamis, triggered by underwater landslides, struck the region before 1492. Fortunately, they may soon be protected by a tsunami early warning system—the kind of system that was fatally absent in the nations struck last December.

Plans for implementing the Intra-Americas Sea Tsunami Warning Project proposal are now underway, notes Grindlay. The proposal includes plans to upgrade an existing network of tidal gauges and seismographs in the Caribbean as well as to educate communities particularly at risk for tsunamis. The project is funded primarily by the Intergovernmental Oceanographic Commission with assistance from the Puerto Rico Seismic Network.

Grindlay’s research dramatically illustrates the need for such a project in the Caribbean. She and her colleagues recently completed a study of past tsunamis striking the densely populated islands there. Since 1492 six fatal tsunamis have been documented in the region. The most recent, in 1946, stemmed from an earthquake in the Dominican Republic and killed 1,800 people. These giant waves traveled as far as 1,300 miles and reached heights of up to 39 feet.

The scientists also found hints of even larger tsunamis that occurred in the Caribbean in prehistoric times. These events were primarily triggered not by earthquakes but by subsequent underwater landslides off the coast of Puerto Rico. “A large amount of material, basically the seafloor, moves very rapidly. When that happens, it pushes water in front of it and that potentially generates the tsunami,” Grindlay says.

By measuring the volume of slumped land, scientists can approximately calculate the magnitude of the ensuing tsunami. In one area off the coast of Puerto Rico, the total volume of slumped land could have generated a wave 80 feet high. The land may not have slumped all at once, however. Grindlay notes that the enormous total volume of the underwater landslides suggests they may have resulted from multiple Earth-shaking events: “Still if you broke that down into four parts you still have significant amount of material.”

Nobody can yet predict when the next Caribbean undersea landslide might occur. But with funding, collaboration, and cooperation, the Intra-Americas Sea Tsunami Warning Project should help insure that next time, the people there will at least get a life-saving advance warning.