An animation of images acquired by Japan's Himawari-8 satellite shows smoke streaming from a large wildfire near the west coast of Russia's Kamchatka Peninsula between June 6 and 7, 2016. (Source: RAMMB/CIRA/NOAA) Wildfire activity in Russia's Far East has seen something of an upsurge this spring compared to the same period last year. One of the most dramatic of the fires has been burning along the west coast of Russia's remote Kamchatka Peninsula. Wildfire is no stranger to the peninsula, but this one has created a bit of a remote sensing spectacle. To see what I mean, check out the animation of satellite images above. Make sure to click on it to view a larger, higher quality version. The peninsula can be seen at the right side of the animation. Watch for thick plumes of grayish smoke streaming west out into the Sea of Okhotsk. A weak low pressure system draws some of the smoke into its vortex circulation. Beneath the smoke, low level stratus clouds also swirl in the weather system's circulation pattern. 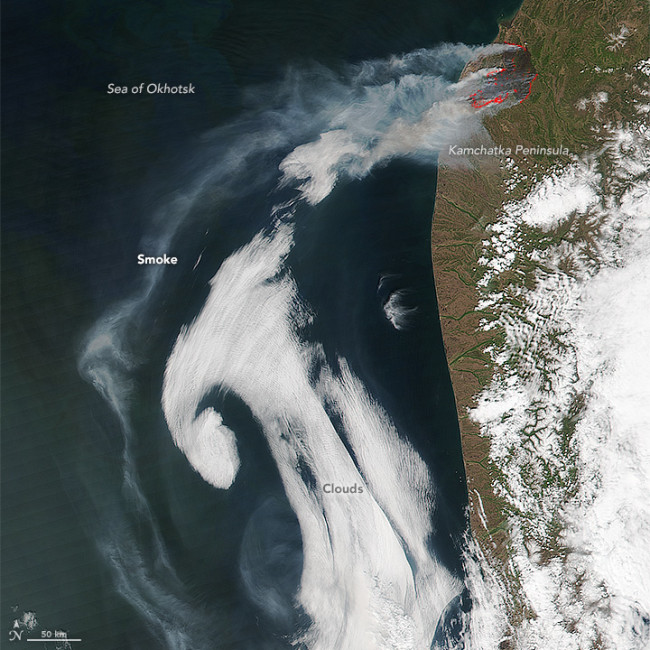 The VIIRS instrument on the Suomi-NPP satellite captured this natural-color image of the large wildfire burning near the west coast of Russia's Kamchatka Peninsula on June 7, 2016. Smoke from the wildfire was drawn into the vortex circulation of a weak area of low pressure over the Sea of Okhotsk. (Source: NASA Earth Observatory) The satellite image above shows a closer view of the fire and its smoke plume. Red outlines show hot spots where the VIIRS instrument on the Suomi-NPP satellite detected warm surface temperatures associated with burning.

An animation of satellite images captured by NASA's Terra and Aqua satellites shows the evolution of a large wildfire on Russia's Kamchatka Peninsula. The animation begins on May 25, 2016, right before the start of the fire. It ends on June 8. (Images: NASA Worldview. Animation: Tom Yulsman) I created the animation above to show the evolution of the wildfire, using imagery from NASA's Terra and Aqua satellites. It began on, or just after, May 25th, along the Khayryuzova River. The tiny village of Ust'-Khayryuzovo is located along the sea coast near the river's outlet. Perhaps some activity associated with the town was the cause of the fire. But that's pure speculation on my part; I haven't been able to find an account of what happened. As I'm writing this post on June 9th, the fire continues to burn.