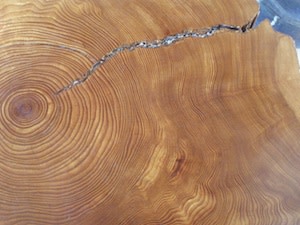 both its age and the local environmental conditions, which allows researchers to track historical changes in an ecosystem. But tree rings can also encode signals from beyond Earth: Ancient trees in the Northern Hemisphere have preserved a radioactive souvenir from a 1200-year-old burst of cosmic rays. Using tree rings, researchers have collected 3,000 years worth of data

on the presence of the radioactive carbon isotope carbon-14 in the atmosphere. When examining the ebb and flow of carbon-14 over time, Japanese researchers noticed an increase during the 8^th and 9^th centuries CE. They decided to look at that period in detail by studying the yearly concentrations of carbon-14 in Japanese cedar trees

. The cedars revealed a 1.2 percent carbon-14 spike that lasted less than a year between 774 and 775 CE, which corresponded with similar spikes in North American and European trees. This peak, twenty times the amount of variation normally caused by the sun’s fluctuations, resulted from a short-term burst of cosmic rays. But where did those rays come from---a supernova, a solar flare, or some other source? Carbon-14 can form when gamma rays, spewed from a supernova

, hit the Earth’s atmosphere. But any supernova big enough to cause the spike in radioactive carbon would have also been bright enough for contemporary astronomers to observe, as they did with two 11^th-century blasts. The hypothetical carbon-14-producing supernova would have been even brighter than the 11^th century ones, which were too weak to create any carbon-14. A solar flare could have made carbon-14 by shooting protons

at Earth, but to produce a peak the size of the one the tree rings recorded, the solar flare would have to have been a “super flare,” large enough to destroy significant amounts of ozone, causing easily visible auroras, and causing mass extinctions. So while the source of the cosmic rays is still unknown, the space signals recorded in trees could one day help researchers solve this astronomical puzzle. Plus, it's just cool.