Ana and Noul: A Tale of Two Cyclones 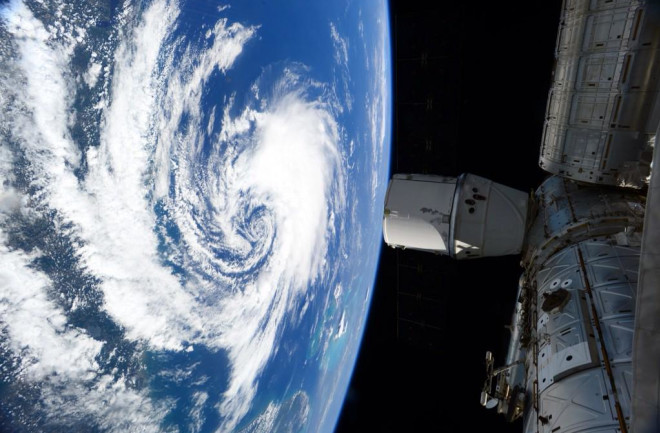 Astronaut Scott Kelly shot this photo of Tropical Storm Ana from the International Space Station on Thursday, May 8, 2015. Tropical Storm Ana is headed for landfall in the Carolinas early on Sunday morning. You can see the cyclone swirling near the coast in the image above shot from the International Space Station. Ana is a preemie: She has arrived three weeks before the official start of the Atlantic hurricane system. And as a preemie, Ana is not terribly strong: As I'm writing this at about 5:30 p.m. EDT on Saturday, maximum sustained winds are pegged at 60 miles per hour. The storm is now moving off the sustaining warmth of the Gulf Stream and is beginning to encounter cooler waters. That combined with wind shear and dry air is forecast to cause gradual weakening until the storm makes landfall. In all likelihood, sustained winds will fall to around 50 miles per hour, rainfall will be limited to no more than three inches, and storm surge shouldn't exceed two feet. So "the main danger of the storm may be rip currents that can drown unwary swimmers," says Bob Henson of Wunderground.com.

Astronaut Terry W. Virts took this photograph of Typhoon Noul from the International Space Station on May 8, 2015. Unlike Ana, Noul is no weakling. In fact, the storm is now rated as super typhoon. As the storm churns towards the Philippines it is encountering favorable environmental conditions, including very warm sea surface temperatures above 30 degrees C. That has led the Joint Typhoon Warning Center to forecast peak sustained winds for Noul of about 160 miles per hour — with gusts to 195 — as the super typhoon nears the northeastern coast of Luzon island. It's not yet clear whether the eye of the storm will come ashore. But it will probably be very close. Whether or not the eye makes landfall, two weather and climate bloggers whose judgment I respect are saying Noul is not likely to be a major disaster for the Philippines. As Bob Henson, a science writer and meteorologist, points out:

Luzon will be on the weaker left front side of Noul, which will make heavy rains the main threat from the storm. I do not expect this to be a major disaster for the Philippines; loss of life should be limited and damage in the tens of millions of dollars even if Noul makes a grazing landfall as a Category 4 storm.

And at Mashable, Andrew Freedman writes:

Much of the land area in far northern Luzon is hilly and relatively sparsely populated, with the largest population center in the storm's path being the 130,000 residents of Tuguegarao. Fortunately for the highly populated communities on the island, the direction of the winds appear likely to nudge the storm's most destructive inner core far enough to the north to avert widespread damage. The capital city of Manila is likely to see little, if any, damage with to rain showers and gusty winds.