An Iceberg the Size of Luxembourg Breaks Free From Antarctica 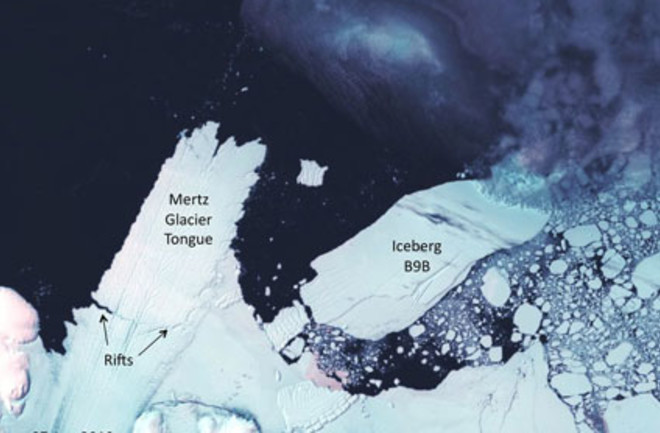 A giant iceberg has broken free from Antarctica, and scientists say the massive ice chunk could interfere with ocean circulation and wildlife--particularly Antarctica's iconic residents, the emperor penguins. The piece of ice broke free when another huge iceberg struck Antarctica's Mertz glacier; now the two icebergs, with a combined weight of 700 million tons, are floating along the Antarctic coast. The iceberg collision and break-off is a rare event and occurs naturally every 50 to 100 years, scientists say. The new iceberg, which is 49 miles long and about 24 miles wide

, holds enough fresh water to supply all of the earth's human needs for a year [ABC News].

Scientists are keeping a close eye on the situation, as both icebergs could potentially change the salinity of the water in the area, which could alter the flow of ocean currents. Since breaking off, both icebergs have moved into an area called a polynya or polynia, where an expanse of open water is surrounded by sea-ice. Distributed across the Southern ocean, polynyas are the zones that produce dense water, super cold and rich in salt that sinks to the bottom of the sea and drives the conveyor-belt like circulation around the globe

[Agence France-Presse]. Now, with the icebergs possibly lodged in this area, they could reduce the production of the

Mario Hoppema, chemical oceanographer at the Alfred Wegener Institute for Polar and Marine Research in Germany, said that as a result "there may be regions of the world's oceans that lose oxygen, and then of course most of the life there will die" [Guardian].

In the short-term, scientists say the new iceberg will impact the colonies of emperor penguins and other wildlife that use the area for feeding. Says Antarctic researcher Neal Young:

"There are emperor penguin colonies about 200-300km away to the west. They come to this area to feed, and seals in the area also come to get access to the open water." ... He suggested that a change in the availability of open water could affect the rate of food production, which would have an impact on the amount of wildlife it could sustain [BBC News].

While the so-called "calving" of this new iceberg was extremely dramatic, scientists have clarified that it

was a natural event, in contrast to recent rapid ice shelf break-off on the Antarctic peninsula where the climate is warming [The Sydney Morning Herald].

Here is Neal Young, a glaciologist at the Antarctic Climate and Ecosystems Research Centre in Tasmania, explaining the significance of the event.

Related Content: 80beats: Is the Once-Stable Part of Antarctica Starting to Melt? 80beats: Fossils of Shrimp-Like Creatures Point to Warmer Antarctica in the Distant Past 80beats: Floods Beneath Antarctica’s Ice Sheet Create a Glacial Slip-and-Slide

80beats: Antarctica is Definitely Feeling the Heat from Global Warming