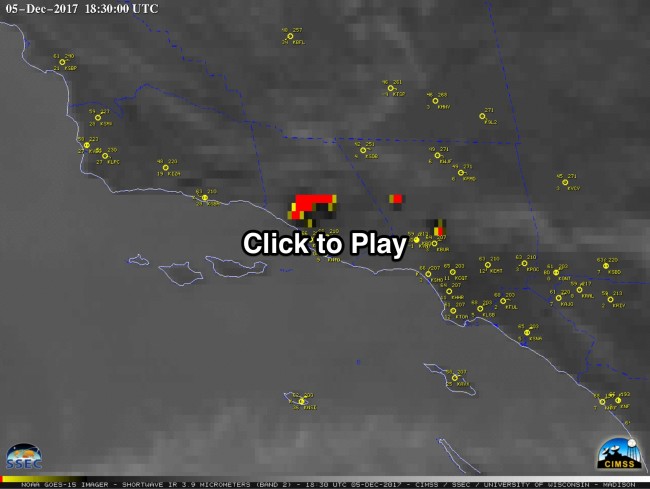 This animation of infrared images shows the rapid development of SoCal wildfires driven by strong Santa Ana winds starting on the evening of Dec. 4th, continuing overnight and into the next day. Heat from the fires is highlighted with black, yellow and red pixels. Please click on the image to watch the animation. (Source: Cooperative Institute for Meteorological Satellite Studies) Carl Engelking, Discover's online editor, has put together a gallery of scarily dramatic images of the SoCal wildfires as seen from space. With that in mind, I thought I would take a somewhat different tack with this post. 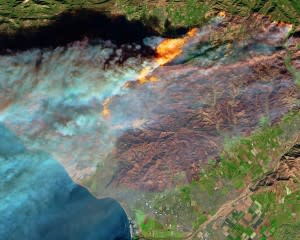 The European Space Agency’s Sentinel-2 satellite captured the data for this false-color image of the Thomas Fire. Active blazes appear orange; the burn scar is brown. (Source: NASA Earth Observatory) Engelking's gallery consists of images acquired during daytime from the International Space Station and two satellites. (Click on the image at right for an example.) They are mostly natural-looking. By comparison, the images that make up the animation above, acquired by the GOES-West satellite, are different. The first one in the sequence was acquired just after sunset. And as the animation runs on, it shows the scene night — a time when infrared sensors can see what's going on despite the lack of illumination from the Sun. I thought the animation was worth sharing because it shows the very start of the Thomas Fire near Ventura, and then two other blazes: the Rye and Creek fires. It also shows just how rapidly these blazes spread across a bone dry landscape on the wings of fierce Santa Ana winds blowing from the northeast. The animation covers a period of 24 hours, starting at 5 p.m local time. (1 UTC). The first heat signature from the Thomas Fire appears at 6:30 p.m. (2:30 UTC). The SoCal blazes erupted following nine of the driest consecutive months in Southern California history, NASA Jet Propulsion Laboratory climatologist Bill Patzert told the Los Angeles Times. “Pile that onto the long drought of the past decade and a half, [and] we are in apocalyptic conditions,” he said.

This animation toggles between two different kinds of nighttime images from the Suomi NPP satellite, acquired on December 5th. One shows the extensive heat signature from the Thomas Fire with black, orange and red pixels. The other shows an extensive smoke plume illuminated by the moon as it drifted over the nearshore waters of the Pacific. (Source: Cooperative Institute for Meteorological Satellite Studies.) The animation above offers another remote sensing perspective. Both images were acquired by the Suomi NPP satellite during the night of December 5th. One is a shortwave infrared view highlighting the very intense heat from the Thomas Fire with black, orange and red pixels. This view comes from the Visible Infrared Imaging Radiometer Suite, or VIIRS, aboard Suomi NPP. The other image also comes from VIIRS — from the instrument's Day/Night Band. DNB views are created using a sensing technique that can detect light at low levels during the night. In this case, relatively bright light from this week's supermoon helped to illuminate the smoke plume streaming out over the Pacific Ocean from the Thomas Fire. Also visible in the DNB view is bright light from the fire, as well as city lights. These stretch from Santa Barbara on the coast to the west (labeled "KSBA" in the image), through Ventura, Oxnard, and on to Los Angeles toward the lower right.

I'll be looking for new examples of interesting remote sensing imagery of the SoCal fires. So I hope you will check back here soon.

I want to offer heartfelt thanks to the folks who run the Satellite Blog at the Cooperative Institute for Meteorological Satellite Studies. They created the two animations I've used in this post. You can see more of their compelling remote sensing imagery of the SoCal fires here. Highly recommended.