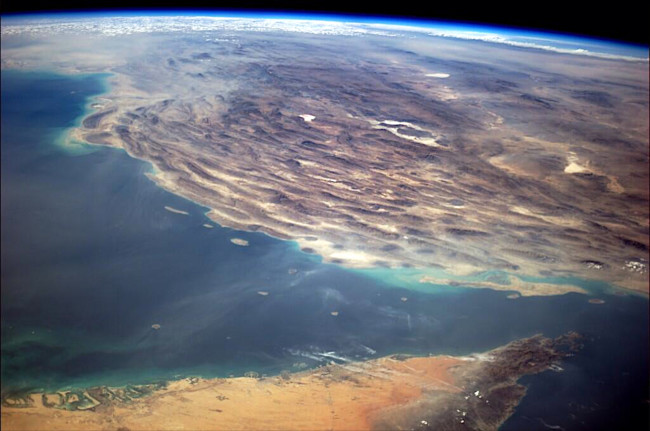 Iran, the Persian Gulf, the United Arab Emirates, and the Strait of Hormuz, as seen from the International Space Station on 6/13/14. (Source: Reid Wiseman/NASA) It's now almost a cliché: Following the takeover of parts of Iraq by Sunni militants, Iran and the United States are now "strange bedfellows." (Or to put it another way, "frenemies.") The photograph above, taken by U.S. astronaut Reid Wiseman from the International Space Station last Friday, shows what America's strange bedfellow looks like from space. In the image, rugged parallel ridges of the Zagros Mountains in Iran create a corrugated topography that sprawls to the north and east from the shores of the Persian Gulf. The United Arab Emirates and Oman occupy the peninsula at the bottom of the image. At the peninsula's tip, to the lower right of the photograph, is the Strait of Hormuz, which connects the Persian Gulf with the Gulf of Oman and the Arabian Sea. This is the world's most important strategic chokepoint for petroleum shipments. As of 2011, 17 million barrels of oil passed through the strait every day — 20 percent of the world's total daily petroleum production, according to the U.S. Energy Information Administration. At its narrowest point, the Strait of Hormuz is just 21 miles wide. But the sea lanes through which tankers pass in either direction are just two miles wide. So in just this one image, Reid Wiseman has provided us with a compelling synoptic view of the geographic context for what's happening in the region. But hold on. I think I've gotten a bit too serious. So if you really want to know what's going on and why it is really so very strange, Jon Stewart goes through it in brilliant — and hilarious — detail right here (zip forward to about 9 minutes).