With two months left, more records could fall before we're all done 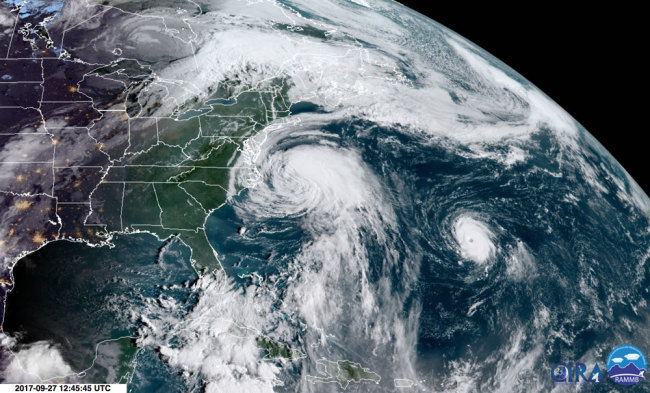 The GOES-16 weather satellite captured this image showing hurricanes Maria, to the left, and Lee, to the right, on the morning of Wednesday, Sept. 27, 2017. (Source: SLIDER by RAMMB/CIRA @ CSU) We've known for some weeks now that the 2017 Atlantic Hurricane season has been absolutely brutal. And now, thanks to new calculations, we have some statistical insights into the raw, howling power of the storms that have caused so much death and destruction — most recently to Puerto Rico, now on the verge of a humanitarian crisis in the aftermath of Hurricane Maria. On Tuesday, Colorado State university hurricane expert Phil Klotzbach reported that by two measures, September has already been the most active month for Atlantic tropical cyclones in records going back to 1893. The first is accumulated cyclone energy. ACE is a measure that takes into account the number, strength, and duration of an individual tropical cyclone, or of all the cyclones over a period of time. And already for September, the ACE total for the Atlantic has been the highest of any month on record, according to Klotzbach. https://twitter.com/philklotzbach/status/912423667904208896 The total accumulated cyclone energy in the Atlantic during September is at 155.4 so far. This number nudges out 2004's 155.0 for the record. You have to go back 56 years to 1961 to find the third most active month for cyclones in the Atlantic in terms of ACE. September has also set a new record for "hurricane days" — the total number of days each Atlantic storm has managed to stay at hurricane strength — during a calendar month. https://twitter.com/philklotzbach/status/912417351563464704 For the previous record we have to go all the way back to September of 1926. Klotzbach offers one important caveat: These measures of hurricane activity are "likely underestimated a bit" for the years prior to the mid 1960s — when the satellite era began — due to a relative lack of observations. On Tuesday, the CSU meteorologist also offered other statistical measures attesting to the extraordinary hurricane activity we've been experiencing. For example, for the first time ever during a single season, three tropical cyclones — Irma, Jose and Maria — each have had an ACE number greater than 40. https://twitter.com/philklotzbach/status/912794156803670017 The destructiveness of this season's Atlantic hurricanes has prompted quite a bit of coverage of possible connections between climate change and tropical cyclones. It would take an entire feature article to do that topic justice. So I won't attempt to tackle it in detail here. Suffice it to say that some climate scientists have drawn links between climate change and what we've seen. For example, Katharine Hayhoe, an atmospheric scientist and professor of political science at Texas Tech University, had this to say in a story in Wired about Hurricane Harvey, which ravaged Houston:

The hurricane is a naturally occurring hazard that is exacerbated by climate change.

That exacerbation, she and others say, comes from rising sea level and warming seas. Rising sea level exacerbates storm surges. And warming sea surface temperatures, or SSTs, should help pump up storms with greater energy and water vapor. But Hayhoe also points out that the destructiveness of storms depends on many factors, not just sea level, sea surface temperatures, and the energy content of the oceans. The actual risk from storms comes from a combination of these factors and how vulnerable our towns and cities are to the physical impacts. For Houston, that vulnerability was particularly high, and so it suffered more than it would have had it been better prepared. "It’s a rapidly growing city with vast areas of impervious surfaces," Hayhoe told Wired. "Its infrastructure is crumbling. And it’s difficult for people to get out of harm's way.” What about just the single issue of warming seas and Atlantic hurricanes? As it turns out, this is not as simple as it might seem. Some research has shown statistical correlations between warming sea surface temperatures and Atlantic hurricane activity in recent decades. But an overview of current research by scientists with NOAA's Geophysical Fluid Dynamics Laboratory (last revised on Aug. 30), found the following:

. . . it is premature to conclude that human activity–and particularly greenhouse warming–has already caused a detectable change in Atlantic hurricane activity. (“Detectable” here means the change is large enough to be distinguishable from the variability due to natural causes.) However, human activity may have already caused some some changes that are not yet detectable due to the small magnitude of the changes or observation limitations, or are not yet confidently modeled (e.g., aerosol effects on regional climate).

Moving forward, the scientists concluded that for the globe as a whole, a signal of climate change likely will emerge from the noise of natural variability:

We also conclude that it is likely that climate warming will cause hurricanes in the coming century to be more intense globally and to have higher rainfall rates than present-day hurricanes. In our view, there are better than even odds that the numbers of very intense (category 4 and 5) hurricanes will increase by a substantial fraction in some basins, while it is likely that the annual number of tropical storms globally will either decrease or remain essentially unchanged.