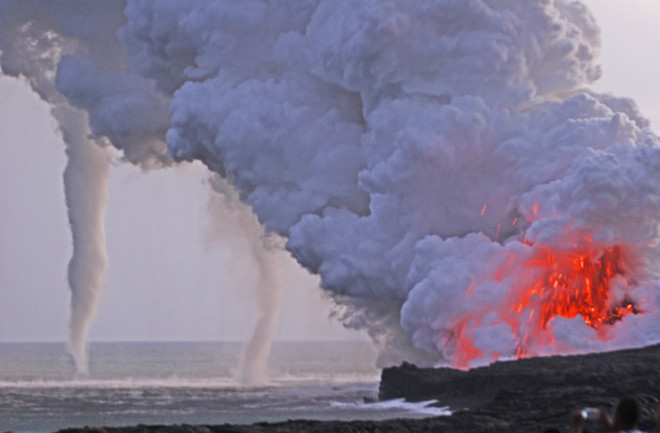 Lucky for us, avid volcano lovers Stephen & Donna O'Meara are also dedicated photographers. You can see images made by the O'Mearas and other adventurous souls in the upcoming exhibit Extreme Exposures at the Annenberg Space for Photography in Los Angeles. Extreme Exposures will showcase photographers have made careers of capturing some of the earth's most extreme environments. Extreme Exposure will be open for viewing October 23, 2010 through April 24, 2011 at the Annenberg Space for Photography in Los Angeles. Stephen & Donna O'Meara explain the chaos in above photograph: "As the hot eruption cloud swirls, a vortex is created that spins off rare volcanic cyclones. As red rivers of lava pour into the Pacific Ocean from Hawaii's Kilauea Volcano, huge explosions blast fragments of hot lava and cinder upwards 1,000 feet or more. These pieces of fragmented lava are called tephra --the booming tephra explosions create arcs of color during long exposures. During the daylight hours the hot lava looks black. As sun goes down it begins to glow red and a vast steam clouds form as it meets with ocean water." Courtesy Stephen & Donna O'Meara/Annenberg Space for Photography Kilauea Volcano, Hawaii USA, 2008