Africa's Animals Were Just-Right Size to be Hunted by Humans 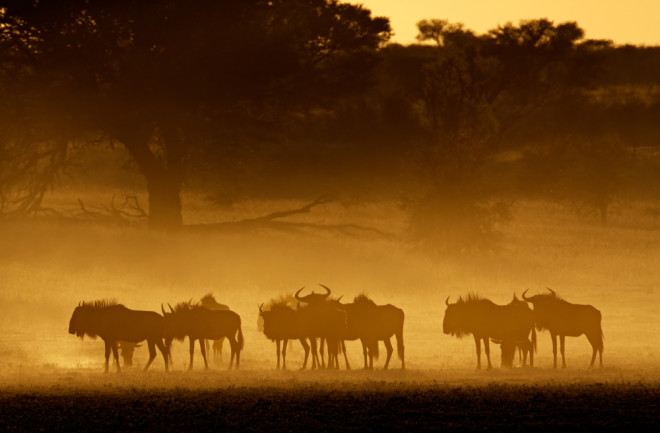 Blue wildebeest (Connochaetes taurinus) in dust at sunrise, Kalahari desert, South Africa. Image courtesy of EcoPrint/Shutterstock There are a number of reasons that Africa's environment was the cradle for early human development: a temperate climate, sunlight year-round, many food sources. It's even been speculated that the continent's grasslands themselves may have driven the evolution of upright walking. Less often talked about as a nice boon for early humans, however, is Africa's Goldilocks fauna---animals that were not too big and not too small but just right for hunting. A scientist from South Africa compared historic populations of large herbivores in Africa with those on the other continents, and found that Africa's unique environmental conditions gave it a few key advantages that boosted its mid-size species and allowed us primates to evolve into the omnivorous species we are today. The research compiled data on the distribution and size of herbivorous ungulates---animals like deer, buffalo and wildebeest---which existed alongside early humans during the late Pleistocene between 11,000 and 126,000 years ago. It found that continents in the southern hemisphere had comparable numbers of these species. But most of South America's herbivores were big, whereas most of Australia's were relatively small, and Africa's tended to be somewhere in the middle. When a warming climate caused a wave of extinctions across the globe, Africa's were pretty much the only herbivores left standing. Aided in part by the continent's good soils and diverse savannah environments that allowed for species differentiation, these mid-sized herbivores became über abundant. And since the animals weren't too big too handle or too small to be worth the energy to hunt, early hominins adapted to take advantage of this prevalent food source. They transitioned from a strictly plant-based diet, one that was becoming increasingly unsustainable in a drying environment, to a diet that probably began with scavenging meat from carcasses and then turned into hunting, as hypothesized in the paper [pdf] published Thursday in the Journal of Biogeography. This allowed Africa's primates to transition from apes to ape men, whose larger brains and hunting skills eventually allowed them to spread to other, less hospitable continents.