Arctic sea ice extent in January was 402,000 square miles below average — an area equivalent to about 60 percent of Alaska 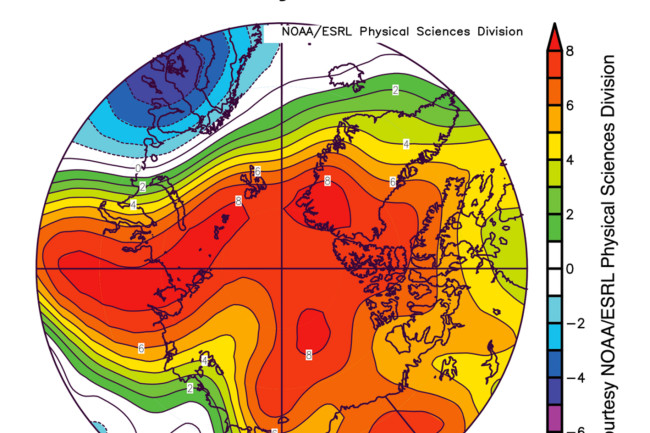 The plot above shows how Arctic region air temperatures at about 3,000 feet above the surface varied from average in January 2016. The North Pole is at the center of map. The air temperature for the region at this height was about 13 degrees F above the 1981-2010 mean — a record. At the surface, January saw an average temperature that was 11 degrees above normal, also a record. (National Snow and Ice Data Center, courtesy NOAA Earth System Research Laboratory Physical Sciences Division) In my previous article here at ImaGeo, I featured a Norwegian icebreaker with no winter sea ice to break in the high Arctic. Since then, the National Snow and Ice Data Center has published its monthly update on sea ice conditions — and the news is pretty dramatic. Record warm Arctic air temperatures running an astonishing 11 degrees F above average at the surface helped drive sea ice to a record low in January. A significant part of the 402,000-square-mile deficit came from unusually low ice coverage in the Barents Sea, including off the Arctic archipelago of Svalbard. Here, sailors aboard Norway's KV Svalbard icebreaker were surprised by just how little ice they saw while on patrol recently.

SEE ALSO: As the 'blue Arctic' expands thanks to global warming, an icebreaker finds no ice to break

“January was absurdly warm in the Arctic," says NSIDC director Mark Serreze, quoted by Bob Henson in his excellent, detailed story about these developments at Weather Underground. A phenomenon known as the Arctic Oscillation, or AO, helped push up air temperatures when it went into a strongly negative mode in January. During the positive phase of the Arctic Oscillation, a high altitude low-pressure system associated with frigid polar air is bottled up tightly over the Arctic by strong jet stream winds. (See the righthand map in the graphic below.) When the AO switches into a negative phase, higher pressure develops in places, weakening those winds and thereby causing them to deform. This, in turns, allows blobs of cold, polar air to spill southward — and abnormal warmth to build up in its place. (See the lefthand map below.) The mid-latitudes also tend to get stormier when the Arctic Oscillation kicks into its negative phase. And goodness knows, we've had a fair bit of that recently! 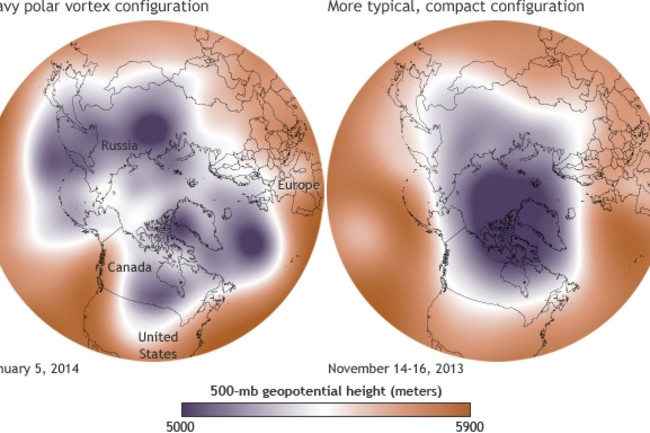 In both maps, the purple is indicative of the cold air of the polar vortex. The map on the left shows conditions on January 5, 2014, when the Arctic Oscillation had turned negative. The map on the right shows how things looked in mid-November 2013, with the oscillation in more positive territory. (Technically speaking, the maps show 500-millibar geopotential heights, meaning the altitude where the air pressure measures 500 millibars. But this is a good proxy for temperature. Maps by NOAA's Climate.gov, based on NCEP Reanalysis data from NOAA ESRL Physical Sciences Division.) While the Arctic Oscillation clearly played an important role in January's record-high warmth and record-low sea ice extent, it also had co-conspirator: global warming — as this graphic illustrates: 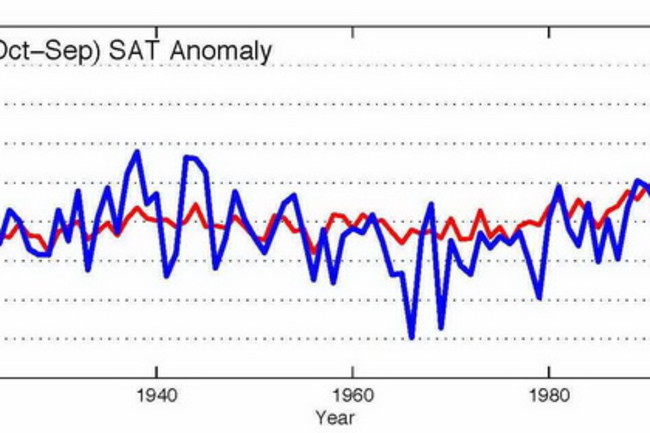 The blue line plots annual temperature anomalies (in °C) recorded at Arctic land stations (north of 60°N). The red line shows the same for the globe as a whole. (Note: There were few stations in the Arctic, particularly in northern Canada, before 1940. Source: Arctic Report Card for 2015. The data are from the CRUTEM4 dataset.) Take a close look at that blue line. It shows how temperatures recorded at land stations in the Arctic have varied from the 1981-2010 mean. The warming trend since the 1970s is obvious — especially compared to the warming of the globe as a whole, shown by the red line. In fact, the Arctic has been warming at twice the rate as lower latitudes since the early 2000's. So while it is true that natural variations from winter to winter, driven by factors like the Arctic Oscillation, play a role in what happens up there, those are little squiggles on top of the longer term warming trend — which is driven by, well, us.