A "warm, crazy winter" leaves the Arctic with a record-breaking low extent of sea ice 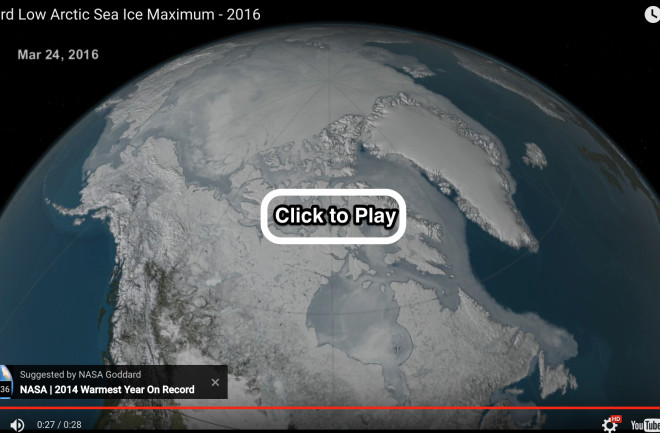 This animation shows the evolution of Arctic sea ice from September 7, 2015, when the ice reached its minimum summer extent, to March 24, 2016, when it reached its wintertime maximum extent. (Source: NASA Goddard's Scientific Visualization Studio/C. Starr) Thanks to dramatically warm conditions, more of the Arctic's sea surface seems to have remained unfrozen this winter than ever before in the era of satellite monitoring, the National Snow and Ice Data Center announced today. This year's low extent of wintertime Arctic sea ice breaks the previous record set just last year. (Satellite monitoring began in 1979.)

“I’ve never seen such a warm, crazy winter in the Arctic,” said NSIDC director Mark Serreze in the announcement from the center. “The heat was relentless.” Air temperatures over the Arctic Ocean between December and February were 4 to 11 degrees Fahrenheit above average in most areas. (Please see the end of this post for a note about my connection with the University of Colorado, where the NSIDC is based.)

True, the Arctic is mostly in a deep-freeze during winter. But the warmer the air temperature, the slower the release of heat accumulated by open Arctic waters during summer. That helps delay the formation of sea ice, and in some areas the water never gives up enough of its warmth to freeze over.

Ice formation was particularly sluggish late in this winter season. “Other than a brief spurt in late February, extent growth has been slow for the past six weeks,” said Walt Meier, a research scientist at the NASA Goddard Space Flight Center. Meier is part of NSIDC’s Arctic Sea Ice News and Analysis team.

This winter also brought an influx of unusually warm water from the Atlantic. Meanwhile, persistent southerly winds in the Kara and Barents seas helped corral ice northward of its typical position, according to the NSIDC.

A broad swath of open leads in Arctic sea ice along the eastern shore of Greenland is seen in this iPhone image shot from a jetliner on Jan. 29, 2016. (Photograph: © Tom Yulsman)

Under the influence of humankind's emissions of heat-trapping greenhouse gases, the Arctic is warming twice as rapidly as the rest of the planet. And this winter has seen an astonishing spike of warming built atop that long-term trend. The NSIDC says a detailed analysis of what happened is coming in early April.

I'll be curious to hear what role, if any, the record-tying El Niño played in bringing unusual warmth to the Arctic. To my decidedly non-expert eyes (I'm a journalist, not a scientist), what happened in the high north during this El Niño looks different from what happened during previous so-called 'super' El Niño events. But we'll see. I could easily be wrong.

Between now and about mid-September, increasing seasonal warmth will cause Arctic sea ice to recede. It usually reaches a summertime minimum in mid-September, give or take a week or so.

With so much water now open to the returning rays of the Sun, we could be headed for a record low summertime sea ice extent. (Last year's summer minimum was fourth lowest on record.) But other factors could intervene. So we'll have to wait and see.

Note: In addition to producing ImaGeo, I direct the Center for Environmental Journalism at the University of Colorado, where the NSIDC is located. |