A Tragic Death — But Also a Lasting Legacy: New Knowledge About Humankind's Impact on the Home Planet 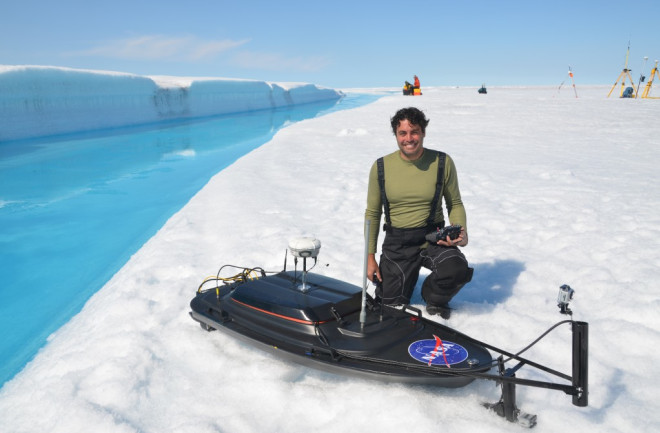 The late Alberto Behar of NASA's Jet Propulsion Laboratory, on the Greenland Ice Sheet with a robotic boat he designed. (Source: UCLA/Laurence C. Smith) Yesterday, I got the sad news that Alberto Behar, a scientist with NASA's Jet Propulsion Laboratory, had died in a plane crash in Pasadena, Calif. Today, we learned anew how much of a contribution he made to understanding of humankind's impact on our planet. Thanks in large measure to the robotic craft and instruments Behar designed, scientists have shown that summertime meltwater rivers atop the Greenland Ice Sheet are contributing directly — and significantly — to global sea level rise. More about that in a minute. But first, I thought I'd share a snippet of Andy Revkin's fitting tribute to Behar at DotEarth:

Alberto Behar, a polar researcher who combined a scientist’s deep curiosity with an engineer’s audacious inventiveness, died on Friday when the plane he was flying crashed shortly after he took off from a small airport near his longtime workplace, NASA’s Jet Propulsion Laboratory in Pasadena, Calif.

Behar, who also taught at Arizona State University and ran the school’s Extreme Environments Robotics and Instrumentation Laboratory, had a passion for creating autonomous craft, sensors or cameras that could probe places no human could ever go — one being down the great roaring watery drain pipes, or moulins, that pepper the Greenland ice sheet in summertime. I wrote about that work in 2008.

The research that Behar's inventiveness contributed to was published today

in the Proceedings of the National Academy of Sciences by a team of scientists who wanted to know what happens with all the meltwater that courses across the Greenland Ice Sheet in summer. And there is a whole lot of it, as this video demonstrates: http://youtu.be/-EMCxE1v22I Greenland's meltwater streams and rivers plunge into sinkholes in the ice called moulins. But is all of it reaching the sea and contributing to global sea level rise? In the video, lead author Laurence C. Smith, who chairs UCLA's geography department, explains:

One of the most pressing environmental problems of the decades and centuries ahead is rising sea level. And one of the leading causes of sea level rise is the melting of ice from glaciers and ice sheets. And Greenland in particular is the single largest melting chunk of ice in world. We know from climate models and weather stations approximately how much melt is being formed on the surface of the ice sheet, but what we don't know is if that water is truly escaping the ice sheet to connect to the ocean and contribute to global sea level rise.

Click to enlarge To find answers, Smith and his colleagues used satellite imagery, as well as two types of remotely controlled boats designed by Michael Behar. What they found was pretty dramatic: The meltwater rivers (click on the image at right from the study to see what they look like from space) may be contributing as much to global sea level rise as all other processes that drain water from the melting ice sheet combined. "What our research shows is there is a clear and definite connection between climatologic melting on the top of the ice sheet . . . to sea level rise and floods in the rivers moving over the Greenland coasts," Smith says. Other research has suggested that with continuing global warming from emissions of carbon dioxide and other greenhouse gases, Greenland could contribute about 20 centimeters to sea-level rise by the year 2100. (That's a little shy of 8 inches.) But recent research suggests

that this could be an underestimate.