A Sudden Surge in Melting Seen Atop Greenland's Ice Sheet

New research suggests that climate change may be contributing to warm-season melting in Greenland through a novel means: dust 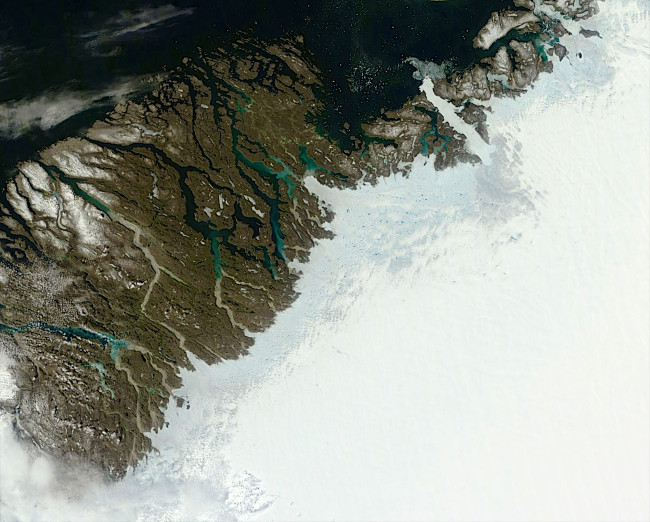 A dusky, bluish-gray band dotted with blue melt ponds parallels the rugged west coast of Greenland, as seen in this image acquired by NASA's Terra satellite on Monday, June 16, 2014. This is an area where snow atop the Greenland ice sheet is melting as temperatures warm. (Please click for a large, high-resolution version. Source: NASA) Springtime melting of snow in Greenland spiked over the past week, adding a bit of an exclamation mark to the start of the warm season there. Melting of snow along the fringes of the Greenland Ice Sheet as temperatures warm in the spring is perfectly normal. You can see its effects in the image above, acquired by NASA's Terra satellite on Monday, June 16. The grayish-blue band dotted by little blue melt ponds shows where snow and maybe some ice is thawing. This year, the melt season got off to a moderately fast start, but for the most part only in the southernmost part of the island. Then, things got "a bit more interesting," says Ted Scambos, lead scientist for the National Snow and Ice Data Center at the University of Colorado, Boulder. (In the interest of full disclosure: Ted is a colleague of mine at CU-Boulder, where I run the Center for Environmental Journalism.) Starting last weekend, the geographical extent of surface melting expanded from about 10 percent of the island to 40 percent. You can see the sudden surge in this graphic: 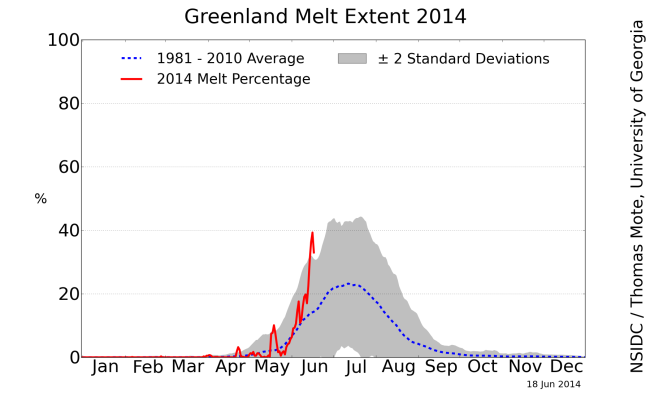 The extent of melting at the surface of the Greenland Ice Sheet is seen in this graphic from the National Snow and Ice Data Center. Note the spike to 40 percent. (Source: NSIDC) It's too soon to tell whether this is just a flash in the pan or the start of a really big melt year. There are examples in the past when "brief spikes of 30 and 40 percent occurred even though the year turned out to be fairly normal," Scambos told me in an email message. In fact, in the image above you can see what looks like the start of a drop off in melt area. That said, "Persistence at this level would get my attention," Scambos says. 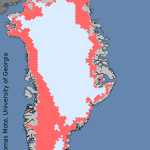 Extent of surface melting in Greenland on 6/17/14. (Source: NSIDC) Last year, things got off to a fast start. But in the end, the extent of warm-season melting in Greenland in 2013 turned out to be fairly close to the long-term average. In 2012, there was also a spike in melting early on. It began in late May and then subsided in June. But then melting just exploded, spreading rapidly and widely — with an astonishingly high peak in July. As an NSIDC Greenland Ice Sheet Today blog post describes it:

Greenland’s surface melting in 2012 was intense, far in excess of any earlier year in the satellite record since 1979. In July 2012, a very unusual weather event occurred. For a few days, 97% of the entire ice sheet indicated surface melting.

We'll just have to wait and see before we'll have a better sense of how things might go this year. In the meantime, I thought I'd also share some new research about a phenomenon that may be helping to accelerate the melting of snow atop the ice sheet during the warm season. And not just modestly. If the new findings are correct, billions of tons of snow are either melting or sublimating every year in large measure because of a seemingly humble substance: dust. Starting suddenly in 2009, there has been a significant drop in how much sunlight is being reflected back into space by dry snow at the surface in Greenland. This reduction in "albedo" means that the surface is darker and is therefore absorbing more solar energy — which leads to more melting of snow. Why is this happening? Marie Dumont of the National Center for Meteorological Research in France, and nine of her colleagues, think they are on to the answer. Writing in a paper published in Nature Geoscience on June 8, she and her colleagues advance an intriguing — and unsettling — hypothesis:

. . . our analysis of remote sensing data indicates that the springtime darkening since 2009 stems from a widespread increase in the amount of light-absorbing impurities in snow, as well as in the atmosphere. We suggest that the transport of dust [by winds] from snow-free areas in the Arctic that are experiencing earlier melting of seasonal snow cover as the climate warms may be a contributing source of impurities.

Reaching this conclusion took a bit of scientific detective work. First, the researchers documented changes in the reflectivity of Greenland snow using data from the MODIS instruments aboard the Terra and Aqua satellites. (The MODIS instrument aboard Terra acquired the data used to produce the image at the top of this post.) Next, they used the remote sensing data to estimate how the impurity content of Greenland snow has also been changing. They found that impurities have been increasing since 2000 — and particularly between 2009 and 2013. But could the darkening of the snow be pinned definitively on this? Or were other factors at work? To help answer the question, Dumont and her colleagues ran simulations using a computer model called Crocus. These simulations showed that other factors by themselves could not explain what was happening. It all made sense only if impurities were factored in. Soot, dust, and microorganisms can all reduce the albedo of snow and thereby cause it to absorb more solar energy. Soot is a powerful absorber, but recent measurements show modest amounts of it in Greenland snow, according to the researchers. On the other hand, substantial amounts of dust have been measured in at least one place on the ice cap, supporting the idea that it's making a significant contribution to the decreased reflectivity of Greenland's ice cap. 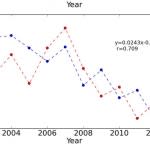 Greenland snow impurities compared to N. American snow cover in June. (Source: M. Dumont et al, Nature Geoscience 2014) But where might it be coming from? Here, the detective work gets even more interesting. It turns out that there is a fairly strong correlation between the rise in impurities in the snow, as measured with remote sensing, and decreases in the extent of snow cover that have been observed in North America during June. (To see the extent of that correlation, click on the thumbnail graphic at left.) This phenomenon may be "uncovering large areas of bare soil and thus enhancing dust erosion," Dumont and her colleagues write. What's her best guess for a specific source? "I would say that probably mostly from the Northeast part of Canada, but this is only based on maps of aerosol optical depth," she told me in an email message. Optical depth is a measure of the atmosphere's transparency, and it can be determined by satellite observations. These observations show "really high" levels of dust over that part of the Canadian Arctic, she says. Dumont cautions that there is no direct evidence yet that earlier snowmelt has led to an increase in dust transport from the Arctic. "That's just an hypothesis that seems reasonable to us and for which we have some indirect evidence," she says. "And that's also why we underline in our paper the urgent need for more in situ measurements of impurities in snow." Lastly, how much of an effect might this be having on the amount of melting in Greenland? The Crocus computer model helped with that too. In the model's simulations, a decrease in snow albedo equal to what has actually been observed in Greenland produced a 12 percent reduction in annual accumulation of snow. If that does not seem like very much, consider that it works out to at least 27 billion tons of snow. Instead of accumulating year by year, it is sublimating or melting. And the latter, of course, contributes to sea level rise. As the climate continues to warm, snow cover in the North American Arctic will disappear ever earlier, possibly increasing the transport of dust to Greenland. And this would obviously make the situation there worse, "accelerating Greenland surface melt and the corresponding sea level rise at a higher rate than currently predicted," Dumont and her colleagues conclude.