But looks are deceiving: the West has seen too little of the white stuff 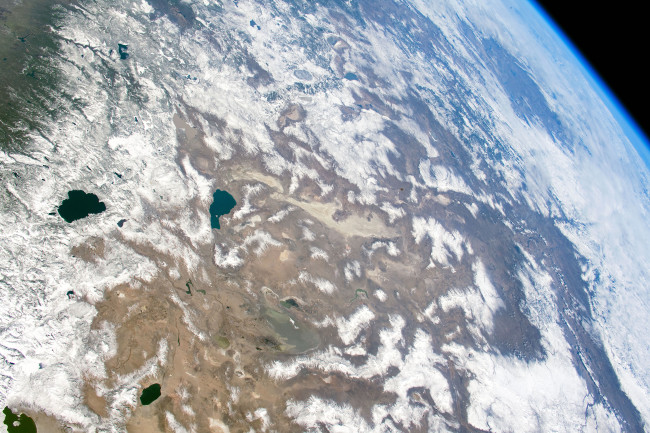 An astronaut aboard the International Space Station captured this photo of the western United States on March 3, 2018. The white mantling of snow is thinner than it should be at this time of year. (Source: NASA Earth Observatory) Views of Earth like this once seemed almost profound — at least I always thought so. That's because we weren't accustomed to seeing our home from a planetary perspective. Now, of course, views of Earth from space are commonplace. So maybe some of us have become a bit jaded. And that's one reason why I'm sharing this photograph taken by an astronaut aboard the International Space Station last month. Sure, we've seen images like this before. But just take a minute to click on it and then explore it in detail. You just might regain some of the wonder that views of Earth from space once engendered. You might also feel relieved, as I was when I first saw this photo, to see what seems like a nice white mantling of snow, which of course is crucial to the region's water supplies. But that snowpack should be a lot thicker and more extensive than it is. 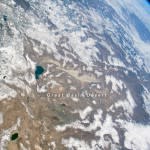 Source: NASA Earth Observatory Before we get into that, click on the thumbnail image at right for a labeled version of the photograph to help you get your geographic bearings. Overall, the view extends from the Sierra Nevada of California along the left side of the photo out to the Columbia Plateau of Oregon and the Snake River Valley of Idaho in the blue-tinged distance. Just to the east of the Sierra Nevada lies the sere landscape of the Basin and Range province, characterized by linear mountains and valleys arranged roughly in parallel. Its desert climate is created largely by the Sierra and Cascade mountains, whose lofty heights wring moisture out of passing storms. Despite appearances, California has experienced a serious dearth of storms, causing the second-driest winter on record for the state. March did seem to bring something of a turn-around, including a deluge between the 20th and 22nd from an atmospheric river that buried Squaw in the mountains in almost 230 inches of snow. But as of yesterday (April 23), California's snowpack stood at a paltry 37 percent of normal for the date. And with the exception of Washington and other more northerly areas, the rest of the West isn't faring much better. Now that the snow season is winding down, I'm hoping to write a post about snowpack in the West in the near future. So please check back here for that. In the meantime, if you have become inured to Earth images acquired from space, I hope you'll take a minute to enjoy this one.