A Starfleet Command Base on Mars? Who Knew? 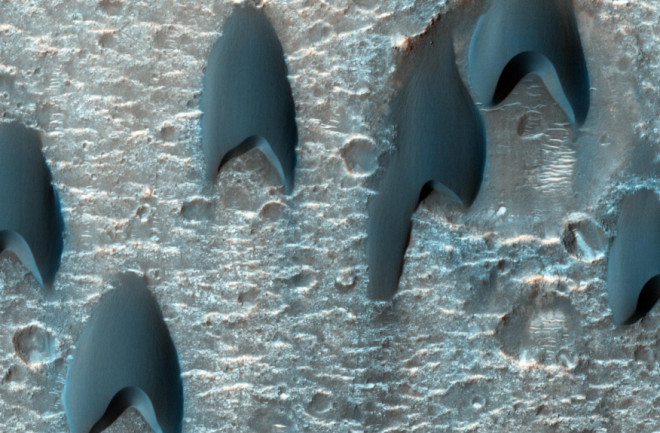 The surface of Mars near Mawrth Vallis, as seen by the HiRISE camera aboard NASA's Mars Reconnaissance Orbiter on Dec. 30, 2013. If you thought Starfleet Command was headquartered only on the north side of San Francisco Bay, across the Golden Bridge from the city, check out what the Mars Reconnaissance Orbiter spied on the surface of Mars in December.

Source: Wikipedia To my eye, those chevron shapes sure look like the Starfleet Command's logo. So perhaps they are architecturally advanced hangers for repair and maintenance of starships that will be used in the next Star Trek movie? Perhaps another view can help reveal the answer:

A wider view of the Martian surface from the HiRise Camera on the Mars Reconnaissance Orbiter. (Source: NASA) They seem to be flying in a V-formation, like World War II B-24 Liberator bombers on a run over Germany, or geese on their way to and from feeding grounds. For bombers, flying in a formation like this improved visual contact between planes, and also defense against enemy fighers. For birds, it greatly improves efficiency on long flights.

Barchan dunes in the Western Sahara. (Source: Geologic Society of America) But obviously, these things aren't hangers or bombers or birds. They're sand dunes. To the left is an even wider view of this portion of the Martian surface. To enlarge, please click... And to the right is an image from Google Earth showing the Western Sahara. Click... The objects in both images look very similar. And that's because they were shaped by similar processes. The dunes in the Western Sahara are called barchan dunes. They form in a relatively flat landscape with winds blowing from only one direction. The ones on Mars are very similar. On the Red Planet, they are formed primarily of sand derived from basaltic rock. According to the HiRise mission web site, they tend to appear dark during the Northern Hemisphere summer on Mars. For NASA's release accompanying these beautiful HiRISE images, go here. And with that, I'll say good bye. May the force be with you! Wait. Wrong movie. Live long and prosper!