A Spectacular View of Earth Unlike Any Seen Since 1972 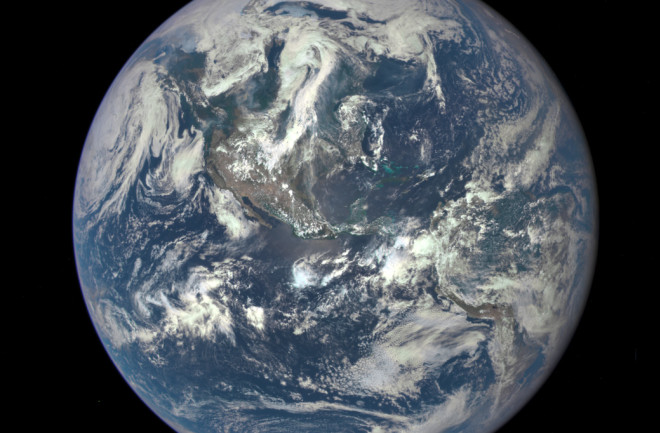 The DISCOVR satellite's first publicly released photograph of the entire sunlit side of Earth, captured on July 6, 2015. (Source: NASA Earth Observatory) You may think you've seen many images of Earth just like this one since the Apollo astronauts snapped the very first one more than four decades ago. But actually, you haven't. Maybe you're thinking, 'What about those recent Blue Marble images from NASA?' Sorry, but nope. Those were mostly mosaics of multiple images stitched together. No single image of the full sunlit face of Earth has been has been shot since the Apollo 17 astronauts captured the iconic Blue Marble photograph in 1972, according to NASA. The spectacular photograph at the top of this post was made on July 6 by the EPIC camera (Earth Polychromatic Imaging Camera) on the DISCVR satellite (Deep Space Climate Observatory). It is EPIC's first image of Earth's sunlit face, taken from 1 million miles away after a five-month journey across 1 million miles of space to the L1 Lagrange Point. That point is four times farther from us than the orbit of the Moon. According to the awesome folks at NASA's Earth Observatory, who posted this image today:

This first public image shows the effects of sunlight scattered by air molecules, giving the disk a characteristic bluish tint. The EPIC team is developing data processing techniques that will emphasize land features and remove this atmospheric effect. Once the instrument begins regular data acquisition, new images will be available every day, 12 to 36 hours after they are acquired by EPIC. These images will be posted to a dedicated web page by autumn 2015.

You can be sure that I'll posting samples here at ImaGeo on a regular basis.