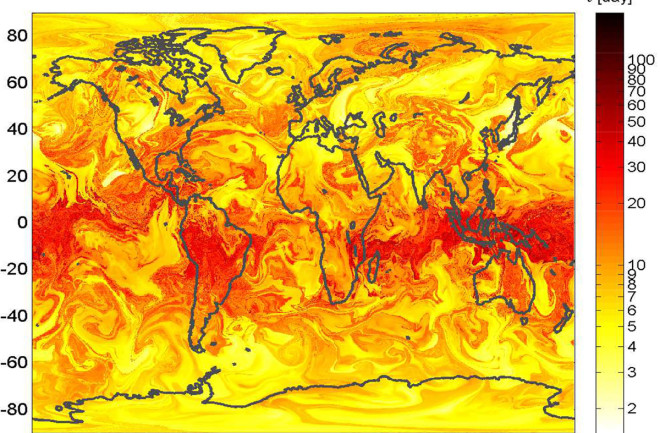 What goes up, must come down. And thanks to a new set of models like the one below, researchers can now map out how long airborne particles — such as those from volcanic eruptions or industrial pollution — will stay aloft.

Budapest-based theoretical physicist Tímea Haszpra discovered that the trajectories of these specks can be simulated using chaos theory, the science behind weather.

Her new models, published in the journal Chaos, found that particulates originating near the equator will stay aloft longer (shown below in red) than particles from the poles. That’s because the trade winds converge in the warm tropics, blowing the particles upward.

But it’s not that simple: Even particles in close proximity can have very different hang times because of how chaotic their movements are. Haszpra’s models revealed that size matters, with bigger chunks sinking faster and closer to their sources. Other factors, such as the initial height of an eruption, also had an effect. She hopes the models will provide valuable information to those exploring atmospheric geoengineering (shooting particulates into the sky) as a means of fighting climate change.

[This story originally appeared in print as "A Particulate Matter."]