A Pandemic of Wildfire, Part 2

Smoke from wildfires has traveled across entire continents and has even been visible from nearly a million miles away in space. 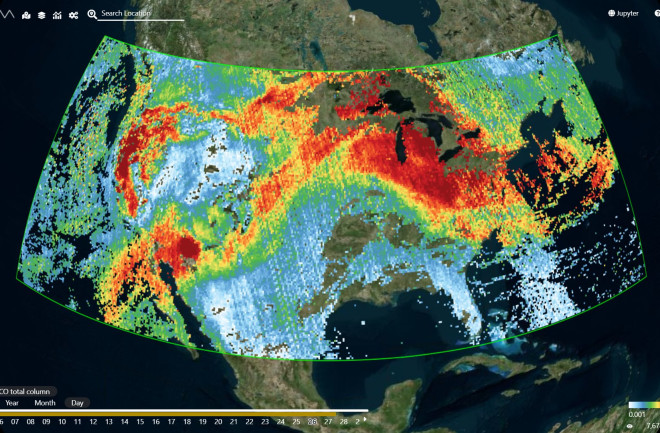 Evidence of smoke from wildfires in California and Colorado is seen here in an image based on data from the Sentinel 5P spacecraft. Yellow, orange and red tones are indicative of smoke. (Credit: ADAM Platform)

Yesterday, I published images captured from space revealing the scope and intensity of 2020's burning season — from Siberia to the western U.S. In this second part of "A Pandemic of Wildfire," I'm focusing not on the flames but on the smoke.

For days on end, it formed an acrid, smothering blanket over vast stretches of territory, causing health-threatening deterioration of air quality in highly populated areas of California, Colorado and other areas. (As I'm writing this from near Boulder, Colorado, I'm looking at my asthma inhaler and anticipating when I can take another dose.)

And as the image above shows, the smoke has been incredibly far-traveled. Based on data from the Sentinel 5P spacecraft, it shows carbon monoxide in a giant plume stretching coast-to-coast across North America on Aug. 26, 2020. The pollutant was coming largely from wildfires, which were burning in California, Oregon, Colorado and elsewhere in the western United States.

As the video progresses and the angle of the sun becomes more favorable, the smoke plume becomes more visible. In contrast to white clouds, it's a light gray color. An analysis of data by University of Wisconsin-Madison scientists indicated that the smoke was traveling at an altitude between 2 and 6 kilometers (1.25 and 3.7 miles).

Remote sensing expert Pierre Markuse produced this stunning image of smoke from California wildfires based on data gathered by the Sentinel 2 spacecraft on Aug. 19, 2020. The yellow hot spots show areas where the heat of fires was detected by another satellite.

The next day, smoke spread across an even more vast area. Using NASA's Worldview website, I calculated a rough estimate of how much territory was covered by the very thickest smoke. From just the California fires (not including sprawling smoke from fires in Colorado), I came up with about 90,000 square miles. (For a high resolution, annotated image showing the extent of the smoke, go here.)

On August 21, NASA’s Terra satellite captured this natural-color imagery of smoke plumes from wildfires in California and other parts of the American West. (Credit: NASA Earth Observatory)

A stubborn dome of high pressure over the American West was keeping temperatures at close to record highs in many places — and for many days on end. The jet stream had retreated to the north, preventing weather systems from blowing into the region and helping to sweep out both the heat and smoke. The summer monsoon — a phenomenon that causes thunderstorms to boil up in the afternoon — also largely failed.

The smoke plume blowing out of California in the image above traces the clockwise circulation pattern of that high-pressure system. The image was acquired by NASA's Terra satellite on Aug. 21. By that day, six people had already lost their lives in California's wildfires. More than 100,000 people had evacuated their homes, and the fires had consumed more than 2,800 square miles since Aug. 15.

By Aug. 21, the smoke was so prominent that it was starting to be visible in images captured by the Deep Space Climate Observatory spacecraft, or DSCOVR — which was 916,131 miles from Earth at the time.

The DSCOVR spacecraft discerned smoke from wildfires in the American West from nearly a million miles away. (Credit: NASA)

For the image above, I used a magnifying tool on an interactive DSCOVR website to zoom in a bit on the western U.S. before taking a screenshot. Then I outlined smoke in yellow. This image was acquired by the spacecraft on Aug. 21.

Half a world away, wildfires have been kicking up again in Siberia, which has been hit particularly hard this year. This is thanks to an unrelenting heat wave linked by scientists to human-caused climate change. (A significant upswing in wildfire activity in California in recent years has been attributed to the same cause.)

A image acquired by the Sentinel 3 spacecraft shows thick smoke over Siberia in brown and yellow tones. (Credit: Directorate-General for Defence Industry and Space, EU Commission)

In the false-color image above, captured by the Sentinel 3 satellite on Aug. 29, thick smoke from multiple wildfires is seen blanketing an estimated 40,000 square miles. Imagine the entire state of Ohio covered in thick smoke — that's the extent of territory that we're talking about here.

With the change of the seasons coming up, temperatures should moderate in Siberia. We can only hope that wildfire activity will taper off, too.

Meanwhile, fire season in California typically kicks into high gear in August, and continues into November. But as we've seen this year, and previous ones as well, wildfire season is starting earlier and lasting longer, almost to the point that it is no longer accurate to say that there is a "season."

Wildfires are, of course, a natural part of the landscape in California and across the U.S. West. But climate change is bringing warmer spring and summer temperatures. It's also reducing snowpack in the mountains and causing it to melt much more quickly than in the past. This is leading to longer and more intense dry seasons that suck moisture out of the soils and dry out vegetation, leaving it prone to burning.

According to Calfire, a website published by the California Department of Forestry and Fire Protection, "the length of fire season is estimated to have increased by 75 days across the Sierras and seems to correspond with an increase in the extent of forest fires across the state."

Given all of that, I suspect we'll be seeing a lot more wildfire smoke yet to come this year.