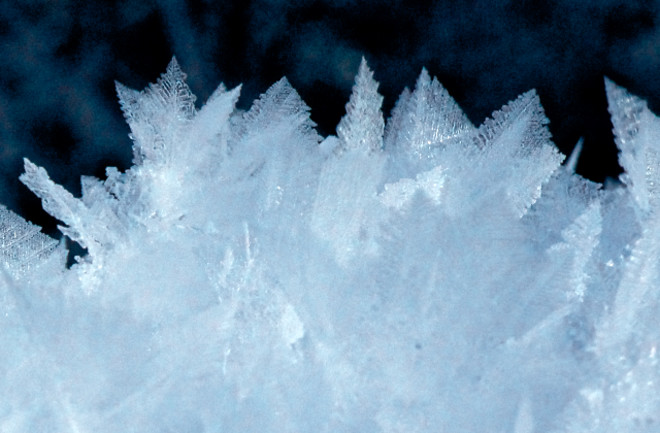 Crystals about a half inch to one inch high coat a bank of snow on the island of Tromsøya in the Norwegian Arctic. (Photograph: © Tom Yulsman) If you've been reading ImaGeo lately you may know that I'm in Norway to report on Arctic climate issues and attend the Arctic Frontiers conference. I'm working on a bigger post about the issues I've learned about. But for now, I thought I would share some of the amazing things I've seen through my camera lens. First up: The extreme closeup above of ice crystals atop the snow cover here on the island of Tromsøya. In many places, the snow is covered with these crystals, each of which is about a half-inch to an inch high. As the sun returns to this place above the Arctic Circle, the miniature crystalline forest catches the light, forming a dazzling, glittering carpet. Here's another view:

Photograph: © Tom Yulsman These crystals are an example of hoar frost, which forms when water vapor in the air condenses directly into ice. When the crystals are relatively small, it's just called frost. But sometimes the crystals grow particularly large, forming hoar frost. For it to form you need cold temperatures and a source of water vapor. Here above the Arctic and along the coast, both are available in abundance. The waters of the fjords and the Norwegian Sea are ice free because they hold a lot of heat carried here by the Gulf Stream. (For a detailed explanation, see this earlier post.) That means there can be a lot of evaporation — thus, no lack of water vapor to form frost. And lately, a high pressure system over the region has brought much colder temperatures than normal. I was here in Tromsø last year to attend the Arctic Frontiers conference (you can read my stories about it here), and I can't recall spotting anything quite as spectacular as I see here now. In addition to the snow, trees and bushes are jacketed in hoar frost, and so are many structures. For more about snowflakes and frost, see this excellent website dedicated to the subject. Lastly, for those of you who are as passionate about photography as I am, some details about the photos: I shot them both with my Sony NEX-7 mirrorless interchangeable lens camera, using a Zeiss f/4 16mm-70mm lens. ISO was set at 200. Focal length was 70mm, and I shot the photo at f/9 and a 100th of a second.