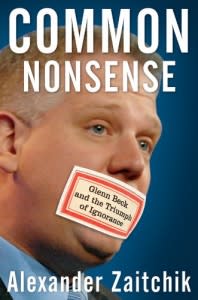 I was re-listening to the latest Point of Inquiry podcast, and really loved this moment, around minute 23:00. I think it was Alex Zaitchick's best sound bite of the interview, about how shifting media standards have enabled Glenn Beck:

One of the strange things about our era right now is that standards just keep mutating and changing. And just when you think something has gone too far, it's not even a blip. What was a controversy a year ago gets one day on Media Matters now and then it's on to the next controversy. I mean, calling the president of the United States a racist can lose you some sponsors, but then a year after that, [Beck] compares the president to a character from Planet of the Apes, and people don't even notice. So it's really--I think a lot of people have lost a lot of money betting where the floor is in recent years.

True. Too true. In fact, I feel like I'm one of them. Once again, the show with Alex Zaitchik is here....hope you'll check it out if you haven't already.