A Look Back at Haiyan and the Devastation it Left Behind

An animation of satellite images show the Philippine city of Tacloban before and after Super Typhoon swept through. (Source: Digital Globe/Google) On Friday, it will be two weeks since Typhoon Haiyan swept across the Philippines as one of the strongest tropical cyclones on record, leaving unimaginable devastation in its wake. So I thought I'd take this opportunity to look back with a few particularly compelling images. I made the animation above using before and after satellite images provided by a partnership between Digital Global and Google. The destruction wrought by winds estimated to have reached 165 miles per hour over land — equivalent to low-end EF-4 tornado — is evident. But in case you missed it, look closely at the upper right quadrant of the after image for the large ships washed ashore. (You can find these images, along with others, here. I think you'll need a Google Plus account.) Here's another before and after animation:

Satellite images of the Dulag area in the Philippines show conditions before and after Typhoon Haiyan came ashore on Nov. 8, 2013. (Source: Digital Globe/Google) The animation shows an area near Dulag, where the eye of Typhoon Haiyan came ashore. I think these images, once again from Digital Globe and Google, dramatize the impact of the enormous amount of rain dumped on the land by the storm as it swept through. 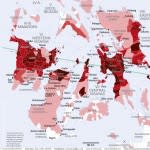 Source: UNOCHA.org It is still not clear how many people lost their lives, but the number is almost certainly in the thousands. The U.N. estimates that 4.4 million people have been displaced, and 13.2 million have been affected in some way. All told, Haiyan destroyed 527,283 houses, and damaged 1,071,505. (Click here for a a U.N. infographic tallying the storm's impact in a variety of ways. And click on the thumbnail at right for a map that charts the storm's toll on houses.) Just how big was Haiyan? Have a look:

A size comparison of Typhoon Haiyan, artificially superimposed over the Gulf of Mexico at left, and Hurricane Katrina at right. (Source: Rick Kohrs, SSEC.) In the image at left, from Rick Khors at the University of Wisconsin's Space Science and Engineering Center, Typhoon Haiyan has been artificially superimposed over the Gulf of Mexico — right where Hurricane Katrina was located before it made landfall. Compare that with Katrina itself in the image next to it. http://www.youtube.com/watch?v=w6p9KbVK97w#t=59 You might also get a sense of Haiyan's enormity in the video above, shot from the International Space Station on Nov. 8, 2013. For me, at least, Haiyan simply defies the imagination — in pretty much every way.