A literally breathtaking view of Earth, as filmed by NASA astronaut Randy Bresnik during a spacewalk

Sometimes on a #spacewalk, you just have to take a moment to enjoy the beauty of our planet Earth. pic.twitter.com/liTnCB60c9

Video shot by NASA astronaut Randy Bresnik from the International Space Station on Nov. 7, 2017 (Source: Randy Bresnik, Twitter) Sometimes, all it takes is a stunning new view of the home planet to make all the complications of every day life go away. For me, at least, that was absolutely the case with the video above. It was shot with a Go-Pro camera during a spacewalk by NASA astronaut Randy Bresnik as he and his comrade Joe Acaba worked outside of the International Space Station. After he posted it Twitter

on Monday, it promptly went viral. As I'm writing this, it has been retweeted more than 13,000 times, and it has attracted nearly 1,000 comments. In his Tweet, Bresnik did not indicate what landmass the space station was passing over as he shot the video. But it is clearly central Mexico. Click here

for a view from Google Earth that confirms it. At about 25 seconds into the clip, look to the extreme left. The southern tip of the Baja Peninsula becomes visible just above some of the space station's solar panels. 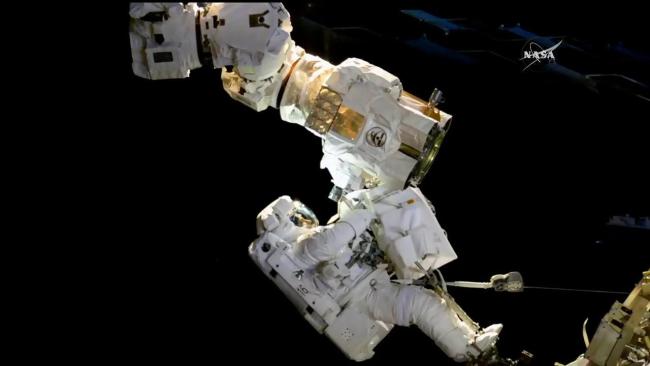 NASA astronauts Randy Bresnik and Joe Acaba performed a spacewalk on Nov. 27, 2017 to install equipment and carry out maintenance on the International Space Station. NASA did not indicate which astronaut is pictured in this image. (Source: NASA) Bresnik and Acaba spent 6 hours and 49 minutes on their spacewalk. The two astronauts installed a new camera system on the Canadarm2 robotic arm, an HD camera on the starboard truss of the station, and they replaced a fuse on an extension of the robotic arm. They also carried out other maintenance activities. It was demanding work. But Bresnik also was inspired by the view. “Sometimes on a #spacewalk, you just have to take a moment to enjoy the beauty of our planet Earth,” he wrote on Twitter. I'd say that's also good advice for all of us down here on the ground.