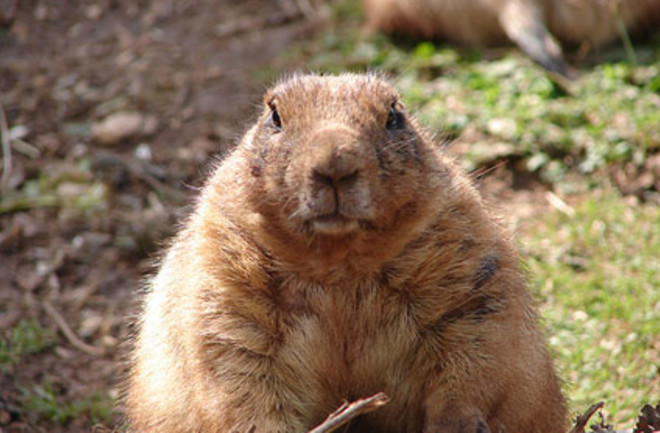 Climate change might have one teensy good effect, at least in the United States: changes to weather patterns may make it harder for the bubonic plague to survive in rodent burrows. Bubonic plague is spread by rodents, like the chubby little prairie dog over there on the right, and their fleas to house-dwelling rats, mice, and squirrels, which can spread the deadly bacteria to humans. By studying the historical correlation between temperature and plague incidences, the researchers noticed that the number of plague cases has been dropping over time, most likely because it's getting hotter, said the study's lead author in a press release from The American Society of Tropical Medicine and Hygiene (ASTMH):

"Following analysis of 56 years worth of climate and plague data, we are encouraged that prevalence of the plague is decreasing, likely due to environmental factors...," said Nils Chr. Stenseth, Professor, Centre for Ecological and Evolutionary Synthesis, University of Oslo.

The changing climate means that the winter's snow melts earlier and the soil dries out more, and the lowered humidity in the burrows kills the fleas. Science News

notes from the paper that:

Above-ground conditions may not offer a good gauge of the environment that fleas experience. In rodent burrows, “humidity depends more on past rainfall and soil type than on the humidity of air outside,” the scientists note. Summer soil moisture tends to reflect snow accumulations the winter before and the date of spring snow melts (with earlier ones leading to drier soils).

Most of the dozen or so people infected with plague each year live in rodent-infested rural housing in the Four Corners area (where Utah, Arizona, New Mexico and Colorado meet). And while currently the plague doesn't wreak much havoc on our lives, killing only one to three people a year, as we continue to push our ever-increasing population into rural areas, higher incidences of the disease are possible. Plus doesn't it just feel good to say we're doing ever better against The Black Death? Related content: 80beats: A Novel That Laughs Along with Climate Change: Ian McEwan’s Solar