A Great Lake Succumbs to the Deep Freeze 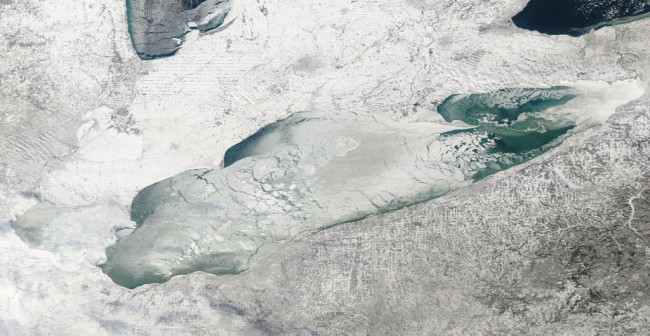 Most of Lake Erie is now covered by ice, as seen in the satellite image taken on Jan. 9, 2014. (Source: NASA) Many of my posts lately have either been about fire or ice (figuratively speaking in the case of the former). So I was hoping to change the subject. But when I saw meteorologist Jeff Masters' post yesterday about the U.S. deep freeze leaving the Great Lakes with their highest level of ice coverage in 20 years, I knew I had to stick with it, at least for now. The news prompted me to check out what the Great Lakes look like from space right now — and particularly Lake Erie, which is the iciest of all. The image above shows the answer. It was captured by NASA's Aqua satellite last Thursday, Jan. 9. Most of the lake is frozen over, and even the greenish areas of open water have quite a lot of ice floating on them.

A map of ice coverage of lakes Huron (upper left quandrant), Ontario (middle right) and Erie (bottom). Red tones are indicative of ice six inches or more in thickness covering 90 percent or more of that area. (Source: Canadian Ice Service) To be more specific, thanks to the deep freeze, more than 90 percent of the lake is frozen over with ice six inches or more thick. The Great Lakes experience significant year-by-year variability in ice cover, caused by natural variations in climate. But the overall long-term trend has been for less and less ice, according to research published in the Journal of Climate in 2010:

The researchers point out that ice coverage of lakes is a "sensitive indicator of regional climate and climate change." Their study found that over periods less than 10 years, changes in ice cover seem to be related to natural climatic patterns: the Atlantic and North Atlantic Oscillation, and El Niño/La Niña cycles. But over a longer period, human-caused climate change may be implicated. In fact, air temperatures at the surface over the Great Lakes did rise between 1973 and 2010. The increases ranged from about 0.4 C degrees per decade over the lower lakes to between 0.6 and 0.7 degrees per decade over the upper lakes. The greatest warming has been seen over Lake Superior, which has also seen an upward trend in water temperature. Other research has found that summer surface water temperatures in Lake Superior rose about 2.5°C between 1979 and 2006, which is quite a bit more than the warming of the atmosphere in the region overall. What might account for the difference? The Journal of Climate study notes that the excess warming of the lake is caused by declining ice cover. Here is how this works: When there is more ice, more sunlight is reflected from the surface back into space, enhancing cold temperatures. Conversely, when air temperatures warm lake ice melts, and this results in more of the sun's energy being absorbed by the relatively dark surface of the lake. This, in turn, causes water temperatures to rise. It will be interesting to see how the rest of this winter shapes up. Given my fascination with the sun, as well as with weather and climate, one thing is a good bet: I'm probably not finished fire and ice posts! (But I am hoping that we're done with deep freeze events.)