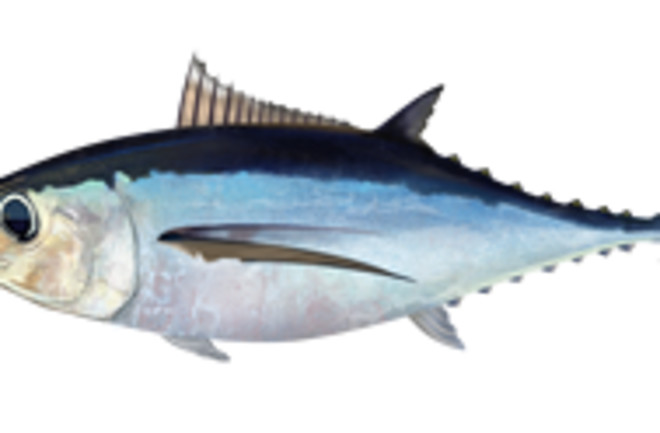 credit: NOAA Some media outlets have picked up on a new study published in the journal Environmental Science and Technology. (More on that coverage in a minute.) Here's the headline from the Oregon State University press release:

Study finds only trace levels of radiation from Fukushima in albacore

The scientists seemed to make sure their results were put in proper context. From the second graph:

In fact, you would have to consume more than 700,000 pounds of the fish with the highest radioactive level – just to match the amount of radiation the average person is annually exposed to in everyday life through cosmic rays, the air, the ground, X-rays and other sources, the authors say.

If you're a newspaper editor, how do you capture a study like this in a headline? British editors varied. The Independent threw out typical bait:

The Daily Maildid the same, but more cleverly:

You get it? Wink, wink. The "radioactive tuna" is still safe to eat! Elsewhere, media headlines also varied. Some closely reflected the study's findings:

Others, such as Reuters, seemed intent on capturing eyeballs:

Although the Reuters piece hewed closely to the perspective of the researchers--who don't find their results worrisome--one of the authors of the study is quoted as saying:

The levels [of radiation] were way too small to really be a food safety issue, but we still want to tell people about it so they know what’s there.

You know, in case you want to avoid radioactive fish. The same researcher also said this:

You can’t say there is absolutely zero risk because any radiation is assumed to carry at least some small risk. But these trace levels are too small to be a realistic concern.

Confused? Don't be. Just read this piece of advice given during the last Fukushima fish freak out.