A dust storm in Greenland? Beautiful satellite images show one far north of the Arctic Circle 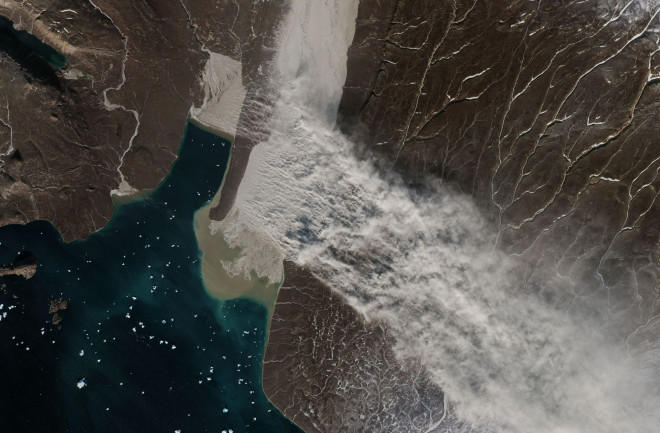 A large plume of dust is seen streaming from a valley on Greenland's east coast in this image acquired by the European Space Agency’s Sentinel-2 spacecraft on September 29, 2018. (Source: NASA Earth Observatory) In late September, a dust storm erupted in a seemingly unlikely place: high in the Arctic in Greenland. It was nothing compared to a Saharan dust storm. Even so, it was large enough to be visible from space. You can see it in the Sentinel-2 satellite image above: a grayish plume of fine silt being swept up by northwesterly winds. The source: a dry bed of a braided river valley that ends in Scoresby Sound on Greenland's east coast. This is about 80 miles northwest of Ittoqqortoomiit, a village at a latitude of 73 degrees North, according to NASA's Earth Observatory. That places the plume at nearly 700 miles north of the Arctic Circle. The dust in Greenland is mainly glacial flour, a fine powder created as a glacier scrapes over bedrock. The flour is carried downstream of the glacier by meltwater streams. In the image above, glacial flour discolors Scoresby Sound where the outwash plain reaches the water.

Comparison of images captured by NASA's Terra satellite on Sept. 27 and 29, 2018, shows the development of a huge plume of dust from a dried out river valley. (Images: NASA Worldview. Animation: Tom Yulsman) NASA's Terra satellite also spotted the blowing plume of glacial flour, as seen in the before and after images above. Satellite images captured over a series of days leading up to the event shows the braided river drying out and turning increasingly gray. The drying allowed the northwesterly winds of the 29th to pick up the fine-grained sediment and carry it from its source. https://twitter.com/SanGasso/status/1047553564300759040 “This is by far the biggest event detected and reported by satellites that I know about,” said Santiago Gassó of NASA’s Goddard Space Flight Center, quoted by NASA's Earth Observatory. He first noticed and Tweeted about the storm on October 3.