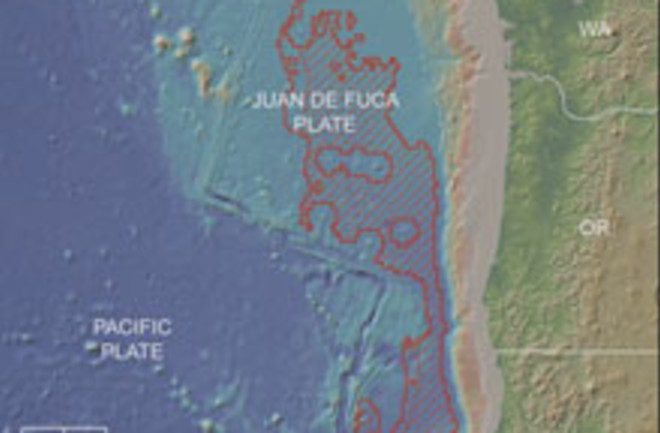 One strategy that’s been proposed to help humans avoid global warming‘s worst consequences is carbon sequestration, in which carbon dioxide would be pumped into rock formations deep underground to prevent it from warming the atmosphere. Now researchers say they’ve discovered a basalt formation off the Pacific coast that could hold emissions from all U.S. power plants and factories for the next 120 years.

“This is the first good example of a site that is of the scale that can potentially make a dent on the problem of carbon dioxide storage,” said [study author] Dave Goldberg [Wired News]. The porous basalt formation lies on the Juan de Fuca plate off the coast of Oregon, and researchers say its features virtually guarantee that the carbon dioxide would stay safely in place, deep beneath the ocean floor.

In the report, published in the Proceedings of the National Academy of Sciences [subscription required], researchers say that these porous deposits have several advantages. One is that minerals in the rock would react with the CO2, forming stable carbonates. Another is that the deposits are blanketed by 1,000 feet of sediments that could block leaks. And the area is near the coast, so CO2 could be piped directly from power plants to injection sites [The New York Times].

Using the Juan de Fuca formation for carbon storage would be an expensive proposition, Goldberg says, requiring huge drilling platforms akin to oil rigs and hundreds of kilometers of pipelines. “It’s going to require a much more significant infrastructure investment than other carbon-sequestration concepts,” he says. But Goldberg thinks that the advantage of having the carbon dioxide sequestered so far from human populations may eventually prove worth the extra cost [ScienceNow Daily News]. Goldberg hopes to get a pilot project in place soon to test out the basalt formation’s performance.

Carbon sequestration has been selected by the U.S. government as a crucial technique to help the country impede global warming, and other researchers are investigating ways to capture CO2 at factories and power plants. The Department of Energy has proposed “clean coal” plants that would rely on this technology, but their largest research project, the FutureGen coal plant, was canceled in January.