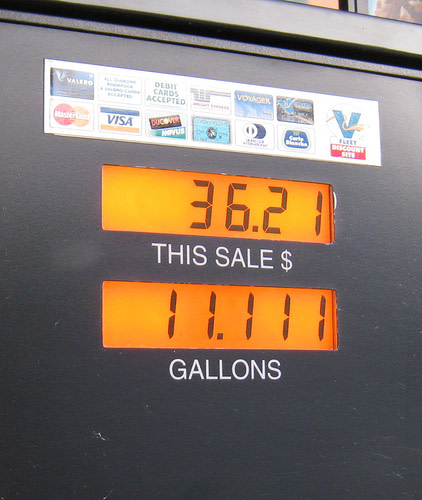 Fancy putting a bit of the aquatic in your gas tank? Go to California. A new kind of biodiesel, containing 20-percent algae-based fuel, went on sale at gas stations in the San Francisco Bay area last week as part of a one-month pilot program. The fuel emits 10 percent fewer hydrocarbons, 30 percent fewer particulates, and 20 percent less carbon monoxide than other biodiesels according to its producer, Solazyme, reports Yale Environment 360

. This is the first time that an algae-based fuel has made it into cars. People have long been searching for plant-based alternatives to fossil fuels, which would help offset their own emissions by absorbing CO2 as they grow. Algae are of particular interest because they yield more fuel per unit of land than any other biofuel. Since they grow in water, they don't compete for land that could otherwise be used for growing food, the way ethanol, another biofuel, does

. But Solazyme's fuel-production method doesn't exploit these advantages; they neither eat CO2 nor occupy pond real estate. Solazyme originally tried growing their algae in ponds but it was not cost-effective. Instead, the company now grows the algae indoors, sheltered from the sun, and feeds them sugars, which they digest through fermentation and convert to fuel, a method that is more economical, Solazyme CEO Jonathan Wolfson told Marc Gunther

at Yale Environment 360. As Solazyme's unsuccessful effort to make pond-grown fuel illustrates, cost is the major disadvantage of algae-based fuel. For example, the US government sponsored the Aquatic Species Project (1978-1996) to produce energy, including biofuels, from algae, but the project shut down because it was not eonomically viable. Better luck this time? The Bay-area pilot program in the Bay area will last one month, a representative of Propel Fuels, the company distributing the biodiesel, told the Chronicle

, and then they will decide whether and how to expand it.

The Dawn of American Plant Science Was Lost in a Botanist's Prolific Notes. You Can Help Digitize Them