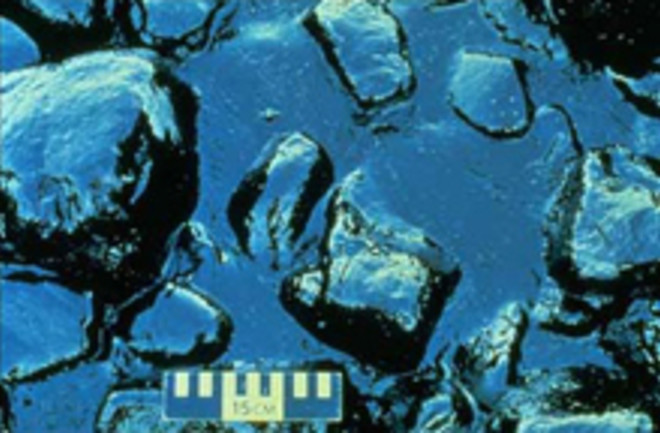 More than two decades have passed since the Exxon Valdez spilled 38,000 tons of crude oil into Alaska's Prince William Sound, but despite cleanup efforts and time, thousands of gallons of oil remain stuck in the region's beaches. A new Nature Geosciencestudy offers an explanation for why the oil has been so slow to disperse: it's the composition of the beaches themselves. According to study leader Michel C. Boufadel, natural forces have created beaches in Prince William Sound with two distinct layers, and water moves 1,000 times slower through the bottom layer than the top.

Once the oil entered the lower level, conditions were right to keep it there, he said. Tidal forces worked to compact the finer-grained gravel even more, creating a nearly oxygen-free environment with low nutrient levels that slowed the ability of the oil to biodegrade [AP]

. Boufadel began his study to explain why the oil from Valdez spill, which happened in March 1989, was lingering longer than most scientists expected.

Most clean-up operations in the area ended in 1992 because the remaining oil was expected to disperse within a few years. A later study discovered that the oil was disappearing at a rate of just 4% each year, and that an estimated 20,000 gallons remained in the beaches [BBC News]

. The researchers dug pits several feet deep all around Eleanor Island to investigate, and found that the two-tiered beaches has allowed plenty of crude to sink down and get stuck.

In their field studies, Dr. Boufadel said, when they would dig into deeper sediments, “the whole place would smell of oil” [The New York Times]

. If environmental agencies want to finish the cleanup, Boufadel suggests that chemicals could be injected into the lower sediment layer to speed up the oil's biodegradation. This study of a 21-year-old oil shipping disaster coincides with a current scare in the same locale; an Exxon ship briefly lost power in Alaskan waters Sunday, but two tugs towed it to safety. This tanker