Nov. 2015 warmest on record During 2015, one global warming record after another has fallen. And if you're looking for relief in the new year, you can probably forget about it. More about the forecast for 2016 in a minute. But first, let's wrap up 2015: The latest global warming record to fall for the year now ending was the one for the month of November: According to data released this past week, the combined average temperature over global land and ocean surfaces last month was an astonishing 1.75 degrees Fahrenheit warmer than the 20th century average of 55.2 degrees F for the month. That means November 2015 shattered the previous record, set in 2013, for warmest such month in the 136-year period of record. With this tally in, it's now clear that September through November also set the mark for highest departure from average temperature for the season — by far. In fact, nine of the first eleven months of 2015 have been record warm, as has been the period January through November. So now there really is just one significant question remaining: By how much will 2015 beat the previous mark — set in 2014 — for warmest year on record? We'll have to wait until the analyses are published, probably in the second week of January, to get an answer. In the meantime, let's delve a bit deeper, with the help of some graphics — starting with the one above. It was released this week by the National Centers for Environmental Information, or NCEI. It shows how temperatures varied in November from the long-term average for the month across the land and ocean surfaces. I'm struck by the large areas of record warmth across the oceans, including in the Pacific and Indian ocean basins, as well as in the Caribbean and the Barents Sea in the Arctic. Overall, Earth's average sea surface temperature in November was warmest on record, surpassing the previous record set last year by 0.36 degrees F, according to the NCEI. 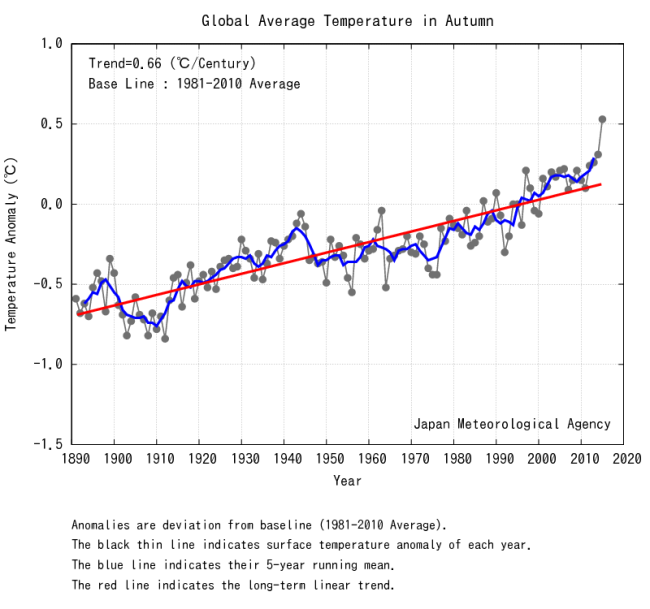 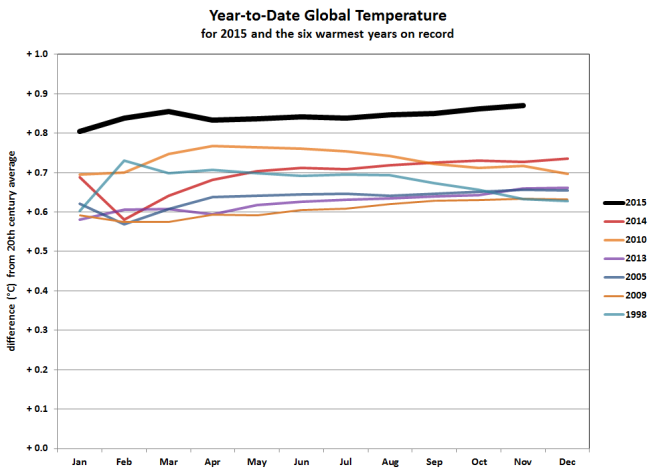 Source: NCEI The black line shows how global temperatures varied from the long-term average for 2015, through the end of November. The other lines represent the six warmest years on record prior to 2015. "Each month along each trace represents the year-to-date average temperature," according to the NCEI analysis. "In other words, the January value is the January average temperature, the February value is the average of both January and February, and so on." Note how high the 2015 line is above the others. It's not even close. A massive El Niño has contributed to 2015's extraordinary warmth — as evidenced by the spear of record-warm surface waters projecting across the tropical Pacific Ocean in the map at the top of the post. Although this year's El Niño may well have earned the nickname "Godzilla," human-caused global warming is the biggest factor by far, according to an analysis by Climate Central. The analysis shows that the 2015 global temperature anomaly is likely to be 1.05ºC (1.89ºF) above the pre-industrial average. El Niño's contribution is expected to be between 0.05ºC and 0.1ºC, with almost all of the rest coming from humankind's emissions of heat-trapping greenhouse gases. If Climate Central's analysis turns out to be correct, anthropogenic climate change will be responsible for no less than 90 percent of the unusual warmth in 2015. Even so, the power of the current El Niño is pretty amazing. It has taken the globe more than 100 years to warm by 1.05 degrees C above the preindustrial level (assuming that's where we wind up by the end of the year). By comparison, it took El Niño just a year or so to contribute 10 percent of that figure. I'd say that's pretty impressive! Although El Niño is expected to weaken and transition to neutral conditions during the spring and summer of next year, the forecast from the UK Met Office suggests that betting on a global cooling trend in 2016 would be unwise, to put it mildly. As Chris Folland, a Met Office research fellow, puts it:

2015 is on track to be the warmest year on record, and this forecast suggests 2016 is likely to be at least as warm, if not warmer.

According to the Met Office estimate, the global mean temperature for 2016 is expected to be between 0.72 °C and 0.96 °C above the long-term average. The central estimate is a temperature anomaly of 0.84 °C — which would make 2016 the warmest on record by the the Met Office's accounting. Lastly, if you spotted a disparity between the numbers from Climate Central and the Met Office, that's because they are different kinds of estimates. Climate Central's numbers show how much 2015's global average temperature is likely to exceed the preindustrial average. Whereas the Met Office estimate looks at the long-term average for global temperature, meaning 1961 through 1990. I'll take one more look at 2015 when the final numbers are tallied in January. Stay tuned. But there's no reason to hold our breath. We already know how this year will end.