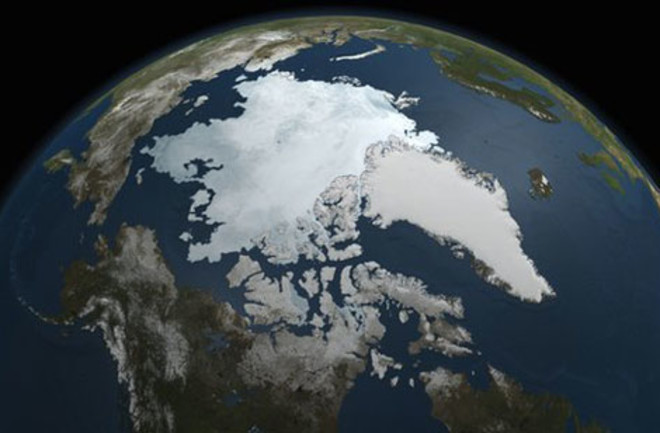 This past summer was hot. Russia burned, New York City experienced the hottest summer on record, and residents of the northern hemisphere in general agreed that a cool breeze would be rather welcome. Now more extensive climate data is coming in for 2010, and guess what? Scientists have confirmed that it was hot.

According to NASA's Goddard Institute for Space Studies, the first 8 months of 2010 is the warmest such January-to-August period in climate records stretching back 131 years. This period was nearly 0.7˚C warmer than the average temperature from 1951 to 1980. (NOAA announced roughly the same finding today, using many of the same temperature stations but a different analysis method.) [ScienceNOW]

Researchers say that El Nino conditions in the Pacific Ocean are partly to blame for raising temperatures globally this past year. But, of course, man-made climate change

is the larger culprit. This summer the Arctic sea ice shrank very quickly because the ice was already thin; at the end of the summer melt the Arctic ice area was the third smallest on record.

The loss of sea ice has forced Pacific walruses to change their habits. Typically the walruses rest on sea ice in between hunting expeditions, but with the retreat of the ice they've been forced to clamber ashore instead. This has happened a few times in recent years; last year some researchers worried

that the mass of walruses crowded together on Alaskan beaches could result in a deadly stampede (walruses reportedly spook easily). But it's not yet clear if the new behavior is detrimental to the creatures--walrus specialist Tony Fischbach told Dot Earth

that he's investigating the issue now.

From the Indian Ocean to the western Pacific to the Caribbean Sea, coral reefs suffered this summer. Warmer ocean temperatures put stress on corals and make them more vulnerable to disease; higher temperatures can also cause the death of the colorful and helpful protozoa that live in the coral, a phenomenon called bleaching

warned of thermal stress throughout the Caribbean this summer, and ScienceNOW reports

that Thai researchers found a drastic rise in disease and bleached corals in past months.

Reefs on both sides of the Thai Peninsula were hit, with up to 100% of some coral species bleached, says James True, a coral biologist at Prince of Songkla University in Hat Yai, Thailand. He expects at least 80% of the most sensitive species to die. "A few inshore reefs got so badly damaged, they probably won't ever come back to the way they were," he says. [ScienceNOW]