2 Ways to Keep an Eye on Illegal Logging: Watch on Tiger-Cam; Bug the Trees

Motion-activated cameras have been used to catch bad nannies and adulterers for years. But in the forest, a high-tech, heat-detecting nannycam has caught video not just of the rare tigers that were its intended targets, but also of some unexpected forest-dwellers: illegal loggers. In the video to the right, you can see a rare Sumatran tiger (one of only 400 left in Indonesia) strolling up to the forest spy camera and saying hello in Indonesia's Riau Province. Seven days later a beast of a very different kind awakens the camera: a bulldozer leveling the forest. The next day, another tiger passes by the spot, across the front of the clear-cut forest. The forests are being cleared for palm oil plantations, according to the WWF:

"Because of its status, both as a protected area and limited production forest, the area cannot be developed as a palm oil plantation, therefore any forest clearance, including bulldozing activities to clear the path, strongly indicates this excavation was illegal," said Ian Kosasih, director of WWF-Indonesia's forest and species program.

The forest in this area, called Bukit Batabuh, is protected because it serves as a corridor between two wildlife parks. Continued bulldozing in this area is fragmenting the Sumatran tiger's habitat, making it more difficult for the big cats to find food, mates, and shelter. Across the world, researchers are trying another high-tech tactic to keep an eye on logging practices. A new study in Brazil has been radio tagging trees in the Amazon to monitor the sustainability of the logging operations occurring in the area. 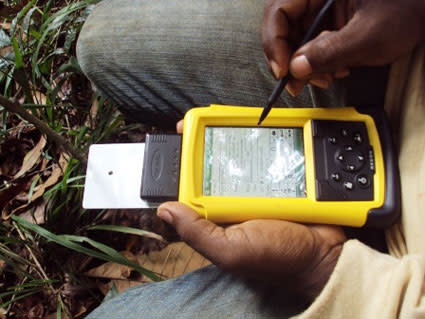 The study is a test to see if the tags can help keep loggers in check, and provide peace of mind to lumber customers who want proof that their trees are sustainably cultivated. Pedro Borges told Reuters

that these implants would allow people logging sustainably to mark their trees so buyers know where the wood came from and was processed:

"People talk a lot these days about wood coming from sustainable forestry practices -- this is a system that can prove it," said Borges, of the organization Acao Verde, or Green Action, which is managing the project on a large farm.

Only "mature" trees over 30 years old can be sustainably logged, but it's not easy to tell what's been legally harvested because corruption allows some illegally logged trees to be "cleaned up" with bogus certification. The chips could help local farmers regain their credibility, as they are making efforts to use less destructive farming habits, a study participant told Reuters

"People out there still think farmers like us are destroying the environment. It's not true and we want to show that it's not true," said Patrik Lunardi, 26, whose family allowed the project to be carried out on their farm.

80beats: Tigers and Humans Tangle in Sumatra; Both Sides Lose

80beats: Orangutans Are Threatened With Extinction as Habitat Shrinks

80beats: A Last Chance Plan to Save Wild Tigers