Study records lowest measurement of ice yet; environmentalists (and polar bears) not pleased. 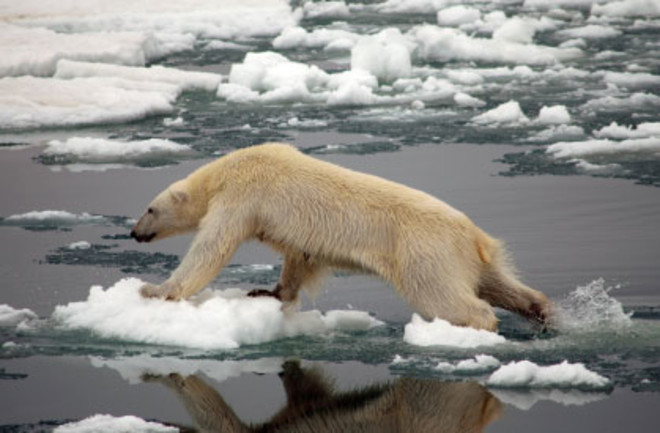 Satellites first began measuring the extent of sea ice in the Arctic Ocean during the 1970s. One summer reading revealed nearly 3 million square miles of it. Last summer that coverage shrank to 1.67 million square miles, the second-lowest number on record, according to climatologist Mark Serreze of the National Snow and Ice Data Center in Boulder, Colorado. “The year 2011 is another exclamation point on the overall downward trend that we see in sea-ice extent,” he says. Georg Heygster, a physicist at the University of Bremen in Germany, goes further. His 2011 data show the lowest coverage of sea ice since records began.

The researchers may have slightly different numbers regarding the exact amount of ice remaining, but both agree that nature is outpacing projections from computer models and that summer sea ice in the Arctic could vanish by 2030. The effects would be far reaching: Polar bears and walruses would lose the ice they depend on for hunting and resting. Ice-free lanes during summer months could open the area to shipping and offshore drilling but could also trigger new geopolitical conflicts.

These changes come atop the strong seasonal variation in Arctic ice, which melts through the summer and freezes up in the winter months. The last decade has been one of the warmest on record for the polar region, with 2007 summer temperatures having risen 9 degrees Fahrenheit above average in some areas. The warming trend accelerates the summer melt even during years of ordinary temperatures. This year the average temperature hovered near the freezing point—typical for the area—yet ice still disappeared at an accelerated pace. Serreze explains that the ice refreezes in winter, but by the time spring arrives, the remaining layer is thinner, so it melts faster. “We’ve got to the point now where the ice is so thin that we don’t need a boost from the weather,” he says.

Heygster agrees. “The increase in temperature in polar regions is very clear,” he says. “We will never have exact proof, but the only thing that can explain this is global warming.”